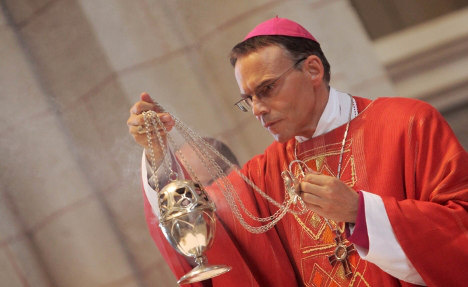 The 108-page report into extortionate spending at the Bishop of Limburg's headquarters was published by the leadership of Germany's Catholic Church on Wednesday.

Franz-Peter Tebartz-van Elst handed in his resignation to Pope Francis the same day. He had been suspended in October after details of his spending emerged.

Despite unrelenting media attention and being summoned to answer to Pope Francis in Rome last October, he only officially offered a statement on Thursday.

In it, Tebartz-van Elst admitted his handling of the role was “in many respects a disorderly, unfocused and primarily a personally-driven management position”.

Yet he then claimed that the reported total costs were inaccurate.

He argued that his out of control spending was a result of other construction projects he had seen go wrong.

As soon as it began, he felt he needed to “observe the quality and the durability of the entire project”. His spending choices should have been overseen by his deputy, Vicar General Franz Kaspar, but he maintained they were not.

"As I am not an authority in the area of church management, as my qualification is in pastoral theory, I have to relinquish the responsibility to Dr Kaspar who was [according to the report into the spending] 'the only person with an overarching view of the seat's assets'."

The Limburg diocese in central Germany said on Thursday it was looking towards a new beginning.

But it added filling Tebartz-van Elst's position would not be easy, due to a lack of suitable candidates in the Catholic Church.

Below are some of the most lavish aspects of the bishop's spending.

Hanging an advent wreath: After the chapel was completed, Tebartz-van Elst decided he wanted a fixture fitted allowing him to hang an advent wreath from the ceiling. To do this, the chapel roof had to be opened up again and a crane deployed – at great expense. The commission said they were not able to tell exactly from the available documents how much this building work had cost but believed it to be €18,000.

A further €344,000 was spent lining the roof and the facade of the chapel with natural stones.