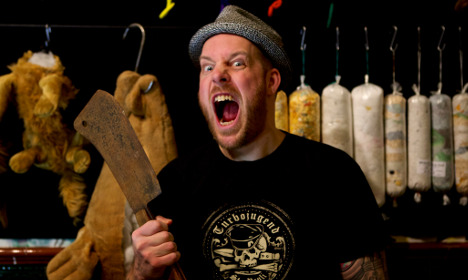 Demonstrations against animal slaughter are often striking salvos of gory slaughterhouse photos, meant to shock people with the "reality" of the meat industry.

"My grandfather was a master butcher, so I was able to use some of his tools," the artist and photographer told The Local.

"At the beginning I just removed the teddies' heads and hung them on hooks," he said. "Then I began making sausages out of the heads' filling."

Menschenkind said one of the main inspirations for the exhibit was his life as a vegetarian.

And it claims to be "since 1886" because the Xpon gallery's venue, Hamburg's historic "Münzburg" apartment building, was originally home to a butcher's shop when it opened in 1886.

Menschenkind's exhibit is laid out like a real butcher's counter, with his fluffy and oddly gruesome wares arrayed behind, including a row of eyeless Teletubbies, hanging by their feet from meat hooks.

CLICK HERE to see some of Menschenkind's strange creations "Big ones get special treatment – sometimes I take off the stomach covering and let the innards spill out, sometimes a whole teddy gets sliced in half," Menschenkind explained.

Even the toy dog he played with as a child has gone into the meat-grinder in the name of his art.

The selection of ground-up, cut-up and even vacuum-packed children's toys was not art in the classical sense, he said. "It's much more the art of starting up a dialogue."

And such a dialogue would aim to make us more conscious of our interactions with meat. "The hope is that people start to really think about it and be more aware as they go through life,” Menschenkind said.

Unsurprisingly, visitors were initially knocked for six by the artist’s butchered toys, but people quickly caught on and appreciated the message, he said.

"As soon as they started to discuss it with each other they understood and became keen. I have had a lot of praise and encouragement.

And children have not been the least bit scared by his work, he claimed.

"The children who've come to the exhibition have all been enthusiastic," the artist said. "A teddy losing its head is probably a daily occurrence in kids' bedrooms."

Menschenkind added he thought adults worried about kids being disturbed by his toys were overreacting.

"Children don't think about things in such a complex way as adults, they don't draw any parallels," he said.