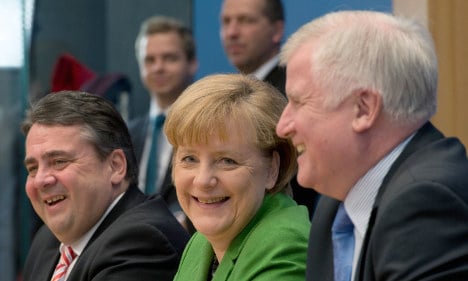 Coming from the centre-right and centre-left of the political specturm, the parties took their time in hashing out policies, but 100 days on, progress is being made.

Chancellor Angela Merkel has maintained her popularity in the face of the Crimea crisis and political scandal within her rank.

Her Foreign Minister, Frank-Walter Steinmeier (SPD), has been key in negotiations with Russia and Ukraine concerning Crimea, although this did bring Germany's interest in maintaining good links with Russian President Vladimir Putin to light.

A poll on Wednesday revealed Merkel's conservative bloc retained a strong lead over the SPD, hovering around 41.5 percent while their centre-left partners, the SPD, came in with 23 percent.

Analysts say Merkel's new four-year term has got off to a solid, if unambitious, start.

It saw the government get past an early bump when Agriculture Minister and former Interior Minister Hans-Peter Friedrich stepped down amid the Edathy scandal.

Looking at the finer points of new policies, Labour Minister Andrea Nahles (SPD) has moved quickly on two controversial pension reforms – retirement at 63 for those who have paid into the system for 45 years and pension improvements for older mothers.

She has also moved forward on an SPD deal-breaker – a national minimum wage that applies to all, except under 18-year-olds and trainees.

Fellow Social Democrat Sigmar Gabriel, who is vice-chancellor and energy and economy minister, earned praise for not losing time in presenting a much-awaited blueprint for the next phase of Germany's vaunted green energy transition.

And defence minister Ursula von der Leyen (CDU) has sought to put her stamp on her portfolio, paying a pre-Christmas visit to troops in Afghanistan and calling for a more family-friendly army.

Mother-of-seven von der Leyen also announced that Germany would be sending more troops on overseas missions – particularly in Africa. This was publically disputed by Development Minister Gerd Müller (CSU), who has taken to referring to his office as the Peace Ministry.

Health Minister Hermann Gröhe took on a tough role, and is staying firm on both keeping the morning-after-pill on prescription and keeping euthanasia illegal.

Finance Minister Wolfgang Schäuble, who helped Germany weather the financial crisis, has announced the government's budget for next year which will entail no new debt for the first time since 1969.

But the grand coalition has faced plenty of criticism. Der Spiegel accused the government of policy contradictions that did not boil down to mere party differences.

It said that nobody wanted a repeat of the early chaos of previous coalitions but there was currently "barely friction because the parts are not at all first assembled into a whole. In truth, everyone is doing his or her own thing."