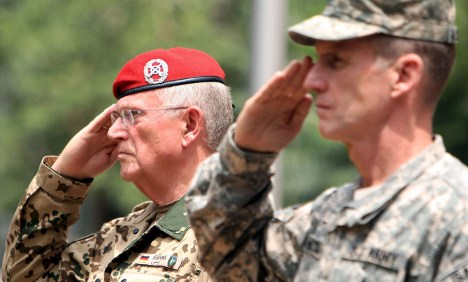 A number of German ex-generals have raised fears over the nation's military strength should it be drawn into a Nato-led conflict.

"We need compulsory military service. There is no other way for Germany to guarantee national defence within the [Nato] mutual defence alliance," retired Nato general Egon Ramms told Bild newspaper. "[It certainly can't be done] on a voluntary basis."

Ramms was commander of the Allied Joint Forces Command between 2007 and 2010, one of the highest-ranking positions in the Nato alliance.

He expressed doubts about Germany's readiness for war in light of the decision in July 2011 to abolish the nine-month stretch of compulsory military service.

Similar fears were raised by retired Inspector General of the Bundeswehr Harald Kujat, who told the paper staff shortages meant the German army had been "brought to its knees" by the move.

"We don't have enough soldiers and not enough qualified ones. We must talk about reintroducing compulsory service," agreed CDU politician Patrick Sensburg, who voted against the July 2011 decision in parliament.

Yet Sensburg warned against bringing up the discussion in the current context in case it "looked like a mobilization from the outside”.

"It's not about having the biggest numbers, it's about having the best skills," the minister told the paper on Tuesday. "Today it is technical and tactical capabilities which count in defending the alliance and not so much the number of troops."

In the same interview the minister defended herself against criticism of her plans to lower the fitness quota of troops.

"It's questionable whether every single soldier has to be able to manage a long march with a heavy pack regardless of which role they fulfill in … the Bundeswehr," she said, adding that requirements should in future concentrate on "what a modern, high-tech army actually needs."

Meanwhile, the Baltic countries and Poland must be reassured that Nato would stand by them whatever happened in Ukraine and Crimea, the minister emphasized.

"Our ultimate aim is a diplomatic solution. But at the same time we have to address the justified concerns of our partners in Nato, these are also our concerns," said the minister.

Nato military exercises and observation of Baltic airspace, for example, helped these countries feel "that they can rely on Nato," she added.