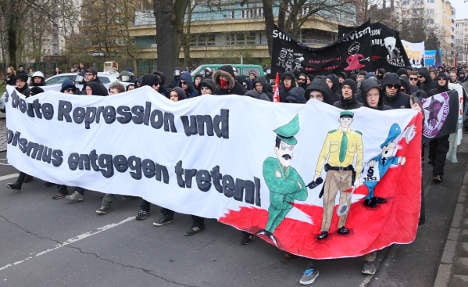 The demonstration in Moabit on Saturday. Photo: DPA

Cars were set alight and stink bombs set off after a far-left demo against "state repression" descended into chaos in Berlin over the weekend.

Two policemen were injured and 17 protesters arrested in the 12-hour long police operation across the city which saw almost 2,000 officers deployed.

Organizers said they were protesting against heavy-handed police tactics such as those seen in Hamburg in early January, where disturbances led to a long crackdown and police restricted zone.

Over the course of the weekend an estimated 1,300 people took to the streets in Kreuzberg, Moabit and Friedrichshain including feminists, members of the Turkish workers movement and refugees from the protest camp at Oranienplatz.

Police made 17 arrests and sent a further 60 away from the scene, a police spokesman on Sunday.

Disturbances began when 700 activists gathered in Moabit in west Berlin on Saturday afternoon for an authorized protest against police tactics.

But this main demo was abandoned after an hour when police arrested participants for refusing to uncover their faces.

During the initial march, flyers were given out announcing impromptu meetings for later that night.

Activists also took to the internet to call for a further demo under the slogan “forbidden through the restricted zone”, referring to the fact that their march was not authorized.

Later on, around 400 demonstrators gathered at Moritzplatz in Kreuzberg.

They were met by 1,800 officers from all over Germany – including Hamburg – which blocked off the area and closed the nearby train station.

A cat and mouse chase ensued with the demonstrators eventually scattering around midnight, the Tagesspiegel newspaper reported on Monday.

Hours later, a number of cars were set alight in a nearby rental lot and stink bombs were thrown in the Mercedes-Benz building around the corner in what police believe were related incidents.

Both police and demonstrators took to Twitter to report incidents, with activists responding to calls to attack police patrols.

One group later threw paint at the Nigerian embassy in Mitte and a further spontaneous march was reported in Friedrichshain. Police are investigating the arson attacks.