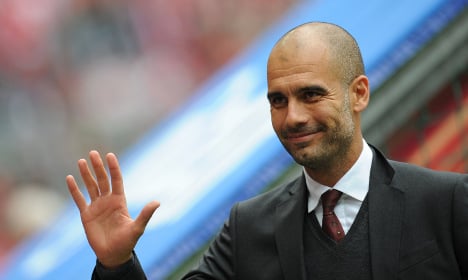 A 19th consecutive league victory at Berlin's Olympic Stadium will give Bayern their 24th German title with seven matches left, beating their own record they set last season.

Bayern's 2-0 win at Mainz 05 on Saturday left them a massive 23 points clear in the league and they will be uncatchable if they win at Hertha.

"I'm just pleased about winning against one of the toughest teams we'll face this season," said Guardiola in Mainz.

"We only need one more win now. It's in our own hands. We can be champions in the capital.

"We've extended our record to 18 wins on the trot. That's the result of a lot of hard work."

Having won 14 of a possible 19 titles during four years as Barcelona coach, Guardiola is set to claim his third title in nine months at Bayern having already won the UEFA Super Cup and Club World Cup.

Having won the treble of Champions League, Bundesliga and German Cup under Guardiola's predecessor Jupp Heynckes last season, Bayern have continued their stranglehold on the German league title.

Guardiola's side are just eight matches away from becoming the first team to ever go through an entire season in Germany's top flight unbeaten.

Bayern left it late at Mainz with midfielder Bastian Schweinsteiger striking with a header on 82 minutes.

Bayern fired in 23 shots on goal to Mainz's four as they extended their record unbeaten run to 51 Bundesliga matches and earn their 18th consecutive league win.

Having drawn Manchester United in the quarter-finals, Bayern have made no secret of their desire to be the first team to defend the Champions League title.

"We're not really concerned about when we win the title, we want to maintain our rhythm," said Bayern goal-scorer Schweinsteiger.

"You always have to work hard for victory here in Mainz.

"They're very aggressive and they press high up the field. The first half wasn't easy, but they were tired towards the end."

Bayern's Germany defender Jerome Boateng said he is relishing the clash against Hertha at Berlin's Olympic City having been born in the capital.

"It's wonderful that we could win the league in Berlin, which is where it all started for me," said the 25-year-old, the half brother of Ghana midfielder Kevin-Prince Boateng.

"We've prepared the way for it today and taken a step closer."