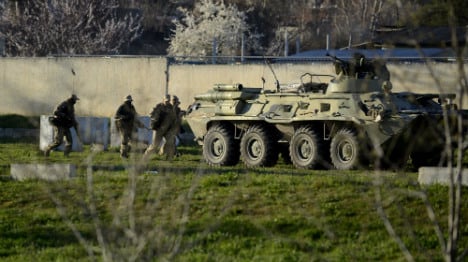 The haunting warning from a nation whose friendship Russian President Vladimir Putin had nurtured over his 14 years in power came amid Western efforts to shore up backing for the besieged interim leaders in Kiev who toppled a Kremlin-backed regime last month.

Canadian Prime Minister Stephen Harper will be the first leader from the G7 group of top industrialized powers to meet interim president Oleksandr Turchynov in Kiev since Crimea staged a contentious March 16 independence vote that saw Russia formally stake its claim to the Ukrainian peninsula on Friday.

The foreign minister of Germany – its economic power playing a decisive role in forging Europe's response to Putin's increasingly belligerent stance – warned that the continent's entire future was at stake.

"The referendum in Crimea… is a violation of international law and an attempt to splinter Europe," Frank-Walter Steinmeier told reporters after meeting Ukrainian Prime Minister Arseniy Yatsenyuk.

The show of diplomatic solidarity may play an important psychological role in Kiev as it faces new rounds of pressure by Russia that include open threats to throw Ukraine's wheezing economy into convulsion by raising its gas rates and demanding colossal payments for disputed debts it could ill afford.

The biggest such signal from Europe came on Friday with the signing in Brussels of the very agreement on closer EU-Ukraine relations whose rejection by the Moscow-backed regime sparked three months of deadly protests that led to its February 22nd fall.

The pact puts Ukraine on a firmer footing toward EU membership that the protesters – tired of corruption and Russian domination – sought and that Putin feared because of the doom it spelled for his dream of recreating a Kremlin-run empire of post-Soviet states.

The political deal should be followed months later by an economic agreement permanently lifting trade barriers and requiring Ukraine to undertake the structural changes needed to kickstart two decades of stuttering growth.

But Ukraine is unlikely to hear its calls for US and EU military support answered despite the hourly advances Russian troops and pro-Kremlin militia are making on the rebel Black Sea peninsula of Crimea.

Yatsenyuk said after his meeting with Steinmeier that "we discussed military and technological cooperation assistance" but reported no further progress.

Russian forces on Friday marked Putin putting his name on a treaty sealing the Kremlin's absorption of the mostly Russian-speaking region by storming and seizing Ukraine's only submarine in the region.

"Don't worry Mum, I'm picking up my things and then I'm coming home," one Ukrainian soldier in a camouflage uniform was heard saying on the phone as Russian troops raised their flag at the main entrance to the large Perevalne military base.

Both the Unites State and Europe have thus far limited their retaliation against Putin to targeted travel and financial sanctions that concern officials but steer clear of impacting the Russian economy.

Washington's steps have been more meaningful because they target what US officials call a Putin "crony bank" as well as oligarchs who are believed to be closest to the Russian strongman and – in one case – actually be running a joint business with him.

Moscow appears to have been taken aback by the force of US President Barack Obama's message – as well as the threat to one day hit Russian industries – because its only response to date has been the release of a list of nine US officials and lawmakers who will be barred from entering the country.

Putin on Friday made light of the US decision to effectively cut the bank suspected of being close to him from the Western financial system and suggested in televised comments that "we should for now hold off on reciprocal steps."

He notably made no mention of the Europeans – their punitive steps so far mostly limited to the largely symbolic suspension of free travel talks and a summit Putin had been due to host in June.

Leading EU nations such as a Britain and Germany – their financial and energy sectors intertwined with Russia's – have particularly questioned why they should be the ones to suffer most in case of an all-out trade war.

Kiev scored one small success on Friday when Moscow removed its objections and allowed monitors from the Organisation for Security and Co-operation in Europe (OSCE) to be deployed in the heavily Russified southeastern swathes of Ukraine.

The interim leaders in Kiev fear the huge forces that Russia has amassed along their country's eastern frontier.

Putin has vowed to use any means necessary to "protect" his compatriots against what he describes as violent ultranationalist elements now running wild in Ukraine.

But Moscow agreed to let an initial force of 100 OSCE monitors watch out for any possible troop movements or other forms of Russian incitement after the rights and security body of 57 nations agreed to stay out of Crimea — an area that it was already barred from entering this month.

Russia's OSCE ambassador Andrei Kelin said in Vienna after the decision the fact that the mission will not be deployed in Crimea was in line with "geopolitical realities".