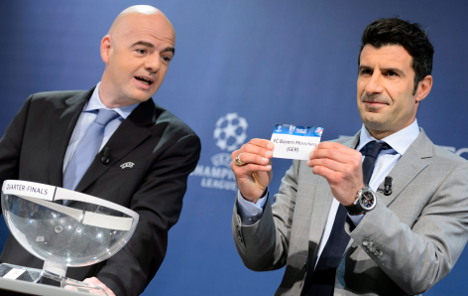 Bayern's ticket is pulled in the draw. Photo: DPA

The teams have met nine times in Champions League action, the last time in the 2010 quarter-finals when Bayern held on, to oust United on away goals after a 4-4 aggregate draw.

The Bundesliga leaders have taken three victories against United's two, but one of those matches was the iconic 1999 final in Barcelona when Teddy Sheringham and Ole Gunnar Solskjaer scored late to hand Bayern one of their most devastating defeats.

Bayern sporting director Matthias Sammer is now looking forward to the task at hand – and feels United can still be dangerous despite a dismal season to date.

"It's a very attractive draw against an opponent who are fighting for stability in their championship as well as in the Champions League," said Sammer.

"Manchester United have shown in the past that they are capable of big things and we have to show them respect.

"On a good day, Manchester remain capable of playing at a very high level and it's up to us to make sure they don't have two good days. It's feasible but dangerous."

Bayern captain and German international Philipp Lahm was equally satisfied, relishing the challenge of taking on the English champions.

"It's a super draw. We are the defending champions so obviously one of the big favourites," Lahm said.

"Manchester United are a super team even if they're having problems and we can't go into this blind. They have excellent individuals and we've had some great battles in the past.

"Playing the first match away from home will not be a major factor. We'll be going to Manchester to attack and score goals."

Bayern's Dutch winger Arjen Robben who scored the winning goal against Borussia Dortmund in last year's final thinks United's domestic problems will count for nothing on the European stage.

"It's a good draw, and we're playing the first leg away," said the former Real Madrid and Chelsea star.

"Man U are not at their best and they're not at the top of the Premier League but that counts for nothing in the Champions League," continued Robben.

The first leg tie is set for April 1 and the return fixture eight days later with the final scheduled for May 24 in Lisbon.