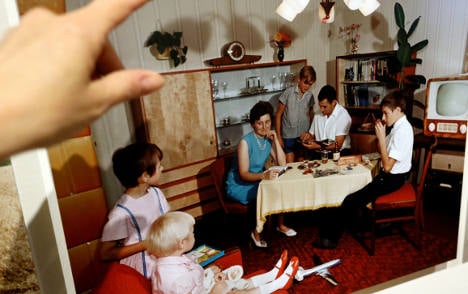 The pictures which went on display at the German Historical Museum in Berlin this week, were taken by freelance photographers Martin Schmidt and Kurt Schwarzer, on commission for magazines, companies, GDR mass organisations – and even publishers of cook books.

"We are showing, without comment, the GDR propaganda," said curator Carola Jüllig, who set up the exibition called 'Colour for the Republic'. "One can ask questions about how the pictures came about, but one can also find them beautiful."

Head of the museum Alexander Koch said, "The GDR photo reporter used his camera on commission. He was to show socialist everyday life in colour and positively. Our exhibition reveals this enactment."

The archives of the two photographers, which belong to the museum, run from 1960 until the start of the 1980s. Most of the pictures were artificially set up – particularly during the 1960s when the museum says the GDR state wanted to portray itself as modern and successful.

"They showed a GDR which glowed, which came over positively, and showed a successful socialist state," said Jüllig.

"The GDR was shown as a country of surplus, full of promises for the future – although it had nothing to do with reality," she said. One picture shows a couple eating pineapple, herrings from a tabletop grill, and drinking red wine.

One of the comments which can be heard in the exhibition alongside the photos, is from former German parliamentary president Wolfgang Thierse, himself from the East. He talks of a certain couldn't-care-less attitude in the GDR, despite the economic troubles it suffered.

The photographers knew what was expected of them, said Jüllig, and earned good money for their work.

Schwarzer saw himself as an 'unpolitical craftsman', while Schmidt was recruited by the Stasi secret service to gather intelligence from West Germany – where he was thus allowed to visit his mother and brother who lived on the other side of the Iron Curtain.

Curator of the Stasi files, Roland Jahn, said many in the GDR had contributed to the make-believe, even if they had not meant to do so.

"We should not limit the history of the GDR to one of repression," he said. "If we fail to understand the self portrayal as directed by the party, we will never understand how it was able to take so many people prisoner for such a long time."