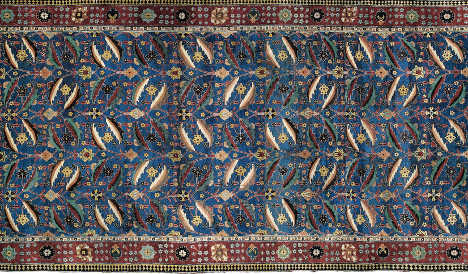 Probably best to take your shoes off. Photo: DPA

The carpet set a new price record in 2011 when it was sold by London auction house Christie's – but two years previously had been valued at just €900 by an auctioneer in Augsburg, Bavaria.

The woman who owned it was initially pleased with the €19,700 she got in the 2009 sale, but was dismayed to see what happened when her carpet was sold again in the UK.

She sued the auctioneer for compensation, saying he had failed to look at her carpet carefully enough.

It was a 17th century Persian carpet measuring 3.39 by 1.53 metres, with a leaf and flower motif, and had once belonged to 19th century socialite the Countess Martine Marie-Pol of Béhague.

The countess left the rug to her nephew the Marquis of Garney, and it stayed in the family until 1987 when a German dealer bought it in an auction. Like the Augsburg dealer, he did not realize the piece’s true value and gave it to his housekeeper as a gift.

The housekeeper left it to the woman in Augsburg in his will – but it did not fit into her flat, so she decided to sell it.

Once she saw the price the carpet fetched in the Christie's sale, she sued the Augsburg auctioneer, claiming damages of €100,000. A court rejected her claim in January 2012, saying the auctioneer had not been negligent or violated his professional duty.

She appealed the verdict – but on Thursday the Augsburg regional appeal court rejected her plea, and she could not appeal any further.

READ MORE: No recompense in case of world's dearest rug