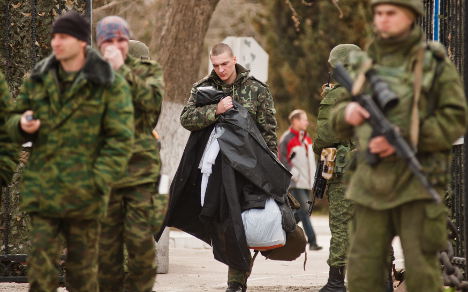 A Ukrainian soldier leaves a military base in Sevastopol, Ukraine. Photo: DPA

"I said again this morning in the conversation that the mandate really needs to go through in the next 24 hours," Steinmeier told reporters after telephone talks with Sergei Lavrov and the chairman of the Organisation for Security and Cooperation in Europe (OSCE), Didier Burkhalter.

"Then we could send the first observers tomorrow."

Steinmeier said the mission in Ukraine was crucial given the escalation in tensions in the region, adding it was "nearly a miracle" that it had not turned into a "military conflict with major bloodshed".

He said the observers would provide an "objective" picture of the situation on the ground.

"That is only possible when we have manpower in the regions and it would be useless if we only had an observer mission the week after next or next month — we need it now," he said.

He said the final hurdle to an agreement was laying out which regions of Ukraine would be covered.

"I hope that we can surmount our differences on the mandate today," he said.

More than 50 observers from the Vienna-based OSCE tried to enter the Ukrainian peninsula of Crimea two weeks ago in a bid to defuse tensions but were repeatedly barred entry at border checkpoints.

Tensions that began in Crimea, which Russia formally absorbed Tuesday amid Western accusations it violated international law, have spread in recent days to the east of the country, with pro-Moscow groups there calling for their own referendum and reattachment to Russia.

Russian President Vladimir Putin's claim that Russia annexing the Ukrainian peninsula of Crimea was akin to Germany's reunification was firmly rejected by Merkel's spokesman on Wednesday.

Putin, a KGB agent in East Germany when the Berlin Wall fell in 1989, said in a speech on Tuesday that Moscow had backed Germany's reunification, and that he now expected Germans to support Russian aspirations to "restore unity".

Chancellor Angela Merkel's spokesman called the comment as "an astonishing comparison" and one of several "skewed historical parallels" that had been made during the Ukraine standoff.

"German unification brought together two separate states of the one nation. By contrast, the Russian intervention has led to the division of Ukraine," Steffen Seibert told a Berlin press conference.

"Besides, German reunification was accompanied in an exemplary manner by the  international community through the 2+4 process" which grouped the two Germanies and World War II victors the US, Russia, Britain and France.

Seibert stressed that Germany had "not forgotten that the former Soviet Union under Mikhail Gorbachev didn't stand in the way of our peaceful reunification, and we are glad about that until today".

Nonetheless, he said, Berlin "sees no parallels between the peaceful reunification of Germany and the events in Crimea".

He added that in the current crisis "Russia is taking the path of international isolation, a path that spells great danger for the coexistence of nations in Europe".

Reports of deaths in Crimea "show us the volatile nature of this approach", Seibert said. "We urgently call for moderation from Moscow and all those responsible in Crimea."

In the meantime, Ukraine's former prime minister Yulia Tymoshenko left a German clinic Wednesday after treatment for severe back pain and was planning to return to Kiev, the hospital said.

Tymoshenko, a leader of the pro-Western Orange Revolution in 2004, has been undergoing medical care for herniated discs at Berlin's renowned Charite university hospital since March 7th.

"Yulia Tymoshenko wants to go back to Kiev today," hospital spokesman Uwe Dolderer said in a statement, announcing her discharge from the clinic.

He said Tymoshenko had twice received injections to the vertebral column in recent days.

The first led to a short-term improvement but the second had produced "an up to now persistently clear reduction of the pain" and improved function in her right leg, he said.

The hospital has recommended she continue her rehabilitation in Ukraine and use crutches until she is fully recovered, he added.