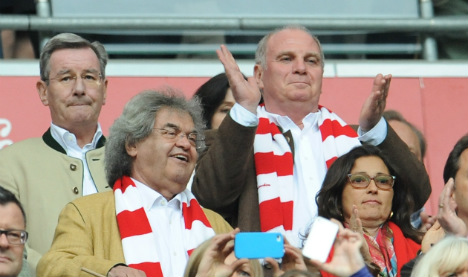 The European champions' board of directors voted unanimously to name Hopfner, the current vice president, to head the Bavarian giants.

His appointment will be put to a vote at a meeting of the club's general assembly on May 2nd.

Runaway Bundesliga leaders Bayern start the weekend 20 points clear at the top of the table and host Bayer Leverkusen on Saturday at the Allianz Arena looking to make it a remarkable 50 league games unbeaten.

But, behind the scenes, the Bavarians have endured arguably the most turbulent week in the club's history.

Hopfner's promotion comes in the wake of his predecessor's fall from grace as Hoeneß resigned on Friday having been sentenced to three and a half years in prison for major tax fraud.

Munich regional court heard how he cheated the state out of €28.5 million ($39.5 million) in what he described as "the mistake of my life".

Having been convicted on Thursday, Hoeneß will start his sentence at Landsberg Prison near Munich, where Adolf Hitler wrote his 1924 novel 'Mein Kampf' after the Munich Beer Hall Putsch.

With more than 30 years service to the club, Hopfner takes over as the figurehead having been credited with making Bayern one of Europe's richest teams.

"We are convinced that the proposed team can continue the growth of the club," said Edmund Stoiber, head of Bayern's management board.

Last November, Bayern posted a record turnover of €432.8 million for the 2012/13 season when they won the treble of Champions League, Bundesliga and German Cup titles.

While Hopfner has rarely enjoyed the media limelight like ex-West Germany internationals Hoeneß and Rummenigge, both credit him with turning the club into a financial powerhouse.

He joined Bayern in July 1983 as managing director, having seen the job advertised in Munich-based newspaper the Sueddeutsche Zeitung.

The 61-year-old eventually oversaw the club's transition to a joint-stock company (AG) in 2001 before taking a seat on the board.

Bayern's honorary president Franz Beckenbauer described him as a "financial genius" for taking the club out of debt.

Germany midfielder Bastian Schweinsteiger admitted "arguing with Hopfner is always a huge struggle" when it comes to contract negotiations.