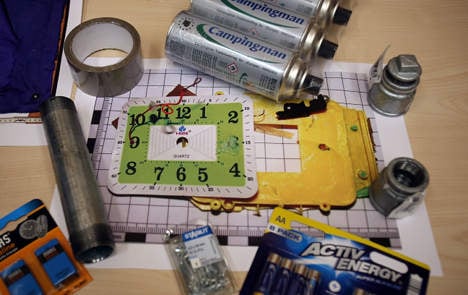 A police reconstruction of the bag's contents. Photo: DPA

A suspect identified only as German national Marco G., 26, was accused of planting a self-made pipe bomb in a sports bag at the main train station of the western city of Bonn.

The bomb never exploded but sparked a major terrorism alert two weeks before Christmas 2012.
"His plan was that a timer would trigger the explosion .. and kill as many people as possible," the national prosecution service said in a statement.
The same suspect was also co-accused in plotting to kill the leader of populist anti-immigrant group Pro-NRW in the state of North Rhine-Westphalia where Bonn is located in March 2013.
The right-wing group had protested and shown caricatures of the Muslim Prophet Mohammed outside a local mosque, said the prosecutors based in the southwestern city of Karlsruhe.
The other three suspects were named as Albanian national Enea B., 43, Turkish-German Koray D., 25, and German Tayfun S., 24.
They had allegedly obtained two handguns with silencers and explosives. They were accused of having planned an imminent attack on the Pro-NRW activist in the city of Leverkusen when they were arrested in March last year.
Marco G. was charged with attempted murder which carries a maximum life term in jail.
All four also face charges of forming a "radical Islamist" terrorist group, conspiracy to murder and weapons charges, which carry terms of up to 15 years.
The trial is set to be held in Düsseldorf, with dates expected to be set in coming weeks.
SEE ALSO: 'Islamists' behind botched Bonn bombing