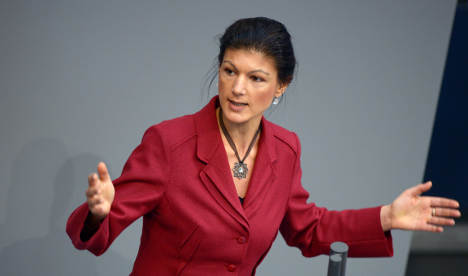 "There are political realities which one must accept," Sahra Wagenknecht said on Wednesday.

Wagenknecht acknowledged that the referendum was not strictly in line with the Ukrainian constitution but said the same applied to the current interim government in Ukraine, which she claimed includes "neo-fascists" and “anti-Semites”.

The referendum on whether to join Russia has been described as "illegal" by Chancellor Angela Merkel.

But Wagenknecht accused the German government of having a "deeply hypocritical foreign policy" and rejected plans by the EU and the International Monetary Fund (IMF) to lend Ukraine billions of euros. She called instead for accounts belonging to oligarchs to be frozen."

Meanwhile, Finance Minister Wolfgang Schäuble said on Wednesday that any financial and economic fallout from the crisis in Ukraine would be "manageable" both for Germany and Europe as a whole.

"We assess the risks from the difficult situation in Ukraine to be very serious. But we believe the fallout for the economy and for financial policy is – and will remain – manageable, for both Germany and Europe as a whole," Schäuble told a news conference.

As long as the crisis continued to unfold "rationally… our financial and budget planning will not be negatively affected," the minister said.
Schäuble was presenting the government's budget planning for 2014-2018, in which Europe's biggest economy is hoping to balance its public finances and is not planning to take up any additional debt in the coming years.
'Annexation'

On Tuesday Merkel labelled Russia's action in Ukraine's Crimea region "an annexation" in a meeting with her party's lawmakers.

Merkel told the conservative legislators that Russia had effectively "stolen" the peninsula and added that "one can call it an annexation", a party source told AFP on condition of anonymity.

The chancellor said Russia must not be allowed to get away with its move on Crimea and stressed the need for a three-fold approach of helping Ukraine, maintaining dialogue with Moscow, while also getting tougher with the Kremlin, including through sanctions.

Merkel, who grew up in communist East Germany and speaks Russian, has held repeated phone calls over the Ukraine crisis with Russian President Vladimir Putin, a former KGB agent who speaks German.

She has told Putin that the intervention was a violation of international law and described as "illegal" a referendum on joining Russia planned in Crimea this month.

Western powers have said they will not recognize the result of the poll.

SEE ALSO: 'Putin is the dealer, Germany the junkie'