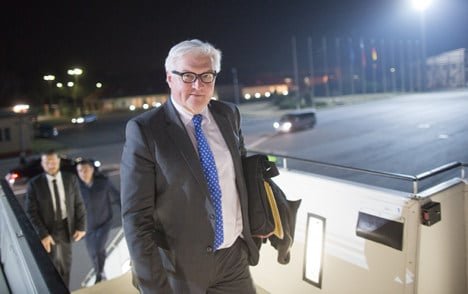 "I am here to say that the Baltic states will not be left alone. This is a joint problem for Nato and the EU," German Foreign Minister Frank-Walter Steinmeier said in Tallinn, Estonia, ahead of talks in neighbouring Latvia and Lithuania.

Russia's moves to absorb Ukraine's Crimean peninsula have rattled nerves in all three Baltic states that joined Nato and the EU to guarantee their security a decade ago after breaking free from the crumbling Soviet Union in 1991.

In an official translation from German to English, Steinmeier added: "If there is no change in Russian tactics until the weekend, the EU foreign ministers will decide about further measures at a meeting in Brussels on Monday."

The top German diplomat did not elaborate but France's Foreign Minister Laurent Fabius said Tuesday that sanctions against Moscow could come as early as this week if Moscow does not respond to Western proposals to solve the crisis in Ukraine.

Fabius said the sanctions would involve "freezing personal assets of Russians or Ukrainians and sanctions on travel, regarding visas."

Russian Foreign Minister Sergei Lavrov said Monday that the West's proposals on Ukraine "do not suit us very much", adding Moscow would unveil its own solution to the crisis.

"This is about rewriting of the borders," Grybauskaite told an EU summit focused on the Ukraine crisis, describing Russia as "dangerous" and "unpredictable".

NATO has already ramped up security measures in its ex-communist countries bordering Ukraine and Russia.

NATO also said Monday it will deploy AWACS reconnaissance aircraft to overfly Poland and Romania as part of its efforts to monitor the crisis in neighbouring Ukraine.

Washington is also sending a dozen F-16 fighter jets and 300 service personnel to Poland as part of a training exercise.