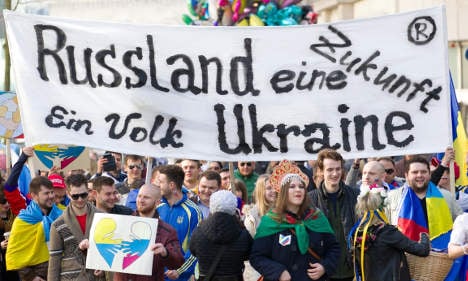 Demonstrators in Hannover on Saturday call for Ukraine to become part of Russia. Photo: DPA

"Germany's reliance on Russian gas can effectively limit European sovereignty. I have no doubt," Tusk told reporters days ahead of a Warsaw visit by Chancellor Angela Merkel.

Around a quarter of Russia's natural gas exports head to Germany and the country is also Russia's biggest oil market.

The top European economy buys around one third of its oil and gas from Russia and has extensive trade and investment links with the vast country to the east.

Germany has tried to defuse the Western standoff with Moscow over Ukraine, but analysts say its voice is muted by fears of endangering its economic ties with Russia.

"The Ukraine issue is a matter of the future security of the European Union," Tusk said on a visit to a military base in northern Poland to mark 15 years since his ex-communist nation joined the NATO defence alliance.

The 28-member EU needs to review its energy policy, he added, ahead of Merkel's Wednesday visit.

"I'll be speaking very openly with Merkel, making it clear that the existing climate and natural gas policies risk posing a threat to the security and sovereignty of Europe as a whole," he said.

"I'll present our views on the political threats tied to dependence on Russian gas and money," Tusk said.

"This, of course, applies not just to Germany, but in recent years Germany has been a strong example of this phenomenon," he added.

Tusk said talks with Merkel would also focus on "how Germany could revise certain economic decisions, to avoid the paralysis of Europe at a time when it must act quickly and adopt a clear stance".

Washington on Friday played down the risk posed to the European economy by Russia's threat to cut off gas supplies to Ukraine, insisting the region had adequate stocks.

Tusk's comments come a day after Merkel told Russian President Vladimir Putin on Sunday she believed the referendum being held in Crimea this month on joining Russia was "illegal".

"The chancellor asserted the German position forcefully that the so-called March 16th referendum on Crimea is illegal. It is against the Ukrainian constitution and international law," her spokesman Steffen Seibert said, recounting a phone call between the two leaders.

In a strongly-worded message, Merkel also said that she "deplored the lack of progress that has been made in forming an international contact group to help find a political path and a solution to resolve the conflict in Ukraine".

Seibert added that the Chancellor had stressed the urgent need to find a solution to the crisis.

According to Seibert, Xi said he was favourable to finding a political solution "through dialogue".

"He emphasized that an end to the crisis should be based on international law," he said.

A statement released by Moscow after Merkel's conversation with Putin – and a subsequent conversation the Russian leader had with the British Prime Minister David Cameron – asserted the Kremlin's position that the pro-Russian forces in Crimea were "legitimate".

Putin wished in particular to stress that "the lawful leadership in Crimea is taking actions based on international law and with the aim of guaranteeing the legitimate interests of the population of the peninsula," Moscow said.

A referendum will be held in Crimea on March 16th to see if the southern Ukrainian region wants to immediately become part of the Russian Federation.