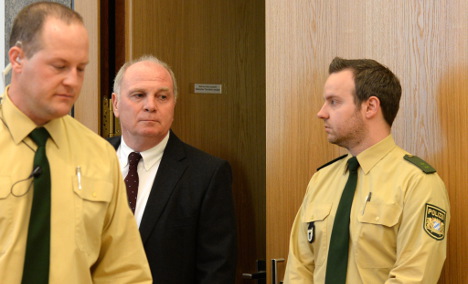 "I committed all the tax crimes I have been charged with," the Bayern boss told the court in Munich in a full confession.

"I'm glad that everything's out in the open now. I'll do everything to ensure that this distressing incident comes to an end," he added.

"But I'm not a parasite, I gave €5 million to social institutions, paid €50 million in taxes. I'm not boasting, I just want to wipe the slate clean."

The sum comes from documents which Hoeneß submitted to the court just a few days before the start the four-day trial, his lawyer Hanns Feigen.

State prosecutors said he had opened his first secret bank account in 2001, and a second in 2004 where he kept huge profits from speculation on the stock market.

He said he never had any idea about the profits and losses he made. "That can happen when you gamble and you're as crazy as I was back then."

Until now, the veteran footballer has admitted to having hidden money from the German taxman, but had said he went clean with authorities by filing a declaration in January last year.

Earlier the court had heard prosecutors accuse the veteran footballer of hiding €33 million in the Swiss bank account in order to avoid paying €3.5 million in taxes.

It remained unclear on Monday whether the confession would mean the trial would have to be postponed while the charges against him were rewritten.

Hoeneß faces a possible jail term if found guilty by the court in Munich and had been due to face a four-day trial with a verdict expected on Thursday.

Hoeneß, 62, has already handed €10 million over to the tax authorities and paid a bail of €5 million after his arrest last year.

The question remains whether judges consider the voluntary declaration valid as grounds for a reduced punishment.