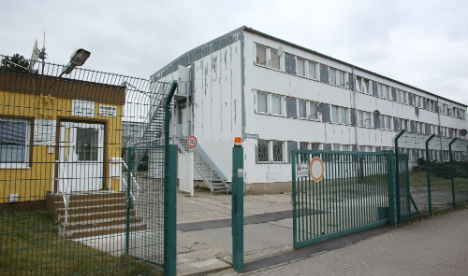 Arrivals, mainly from eastern Europe, jumped by almost two-thirds in 2013 to the highest level in 14 years, even though most applicants have little chance of being accepted as political refugees.

In one residential home on the outskirts of the sprawling German capital, a family of six from Bosnia-Hercegovina now share a spartan room of just 25 square metres (270 square feet).

The ethnic Roma family, who tried to leave behind a life of poverty and discrimination in Bosnia, now kill time in a room with just the bare necessities: a bed, a table and a dilapidated sofa.

Their temporary abode, a former nursing home on the edge of a forest, was meant to close in mid-April. But, given the recent surge of asylum seekers, it is now expected to stay open longer.

Across the city, in the tower blocks of Lichtenberg in the former East Berlin, people from 18 nations live in a 10-storey building that was converted into an asylum seekers' centre more than two years ago.

"We have 350 places in the centre but we currently have 360-370 people," said its director Birgit Bauer, adding that four or five people commonly share 20 square metres, with communal showers and toilets.

"Some families who already live in cramped conditions have agreed to accept more people into their studio apartments," she said.

Since late 2010, Germany has seen the number of asylum seekers rise sharply.

Last year the jump was 64 percent, to 127,023 applicants. And in January it rose by a record 76.7 percent from a year earlier, according to the Office for Migration.

The leading country of origin last year was Serbia with more than 18,000 applications, up 40 percent on 2012. About 90 percent of them were Roma.

Many have also come from Bosnia-Hercegovina, with arrivals up 104 percent in 2013, and Kosovo — up 74.5 percent — as well as Russia, including Chechnya.

"Many people from the former Yugoslavia found refuge in Germany during the war in the early '90s," said Bauer. "Now they are returning with their families and, in their quest for a better future, see Germany as their last hope."

Citizens of Serbia, Montenegro and Macedonia, another top country of origin, have since late 2009 been allowed to travel in the Schengen visa-free zone.

Serbian Prime Minister Ivica Dacic has said that many people from his country "do not come for asylum but to take the money because the benefits are high".

In Germany, while waiting for their request to be processed, families are entitled to 134 euros ($185) per month for adults and 80 euros per child.

The influx has been met by outbreaks of xenophobia, with neo-Nazis rallying last year outside a Berlin refugee centre.

Berlin is currently housing 8,360 asylum seekers in centres built to house no more than 8,100 people.

Some 450 others live in emergency accommodation in hotels "for a few days or a week or two", said Franz Allert, chairman of Berlin's Office of Health and Social Issues, which is responsible for refugee issues.

"The situation is tense, even serious because this year we need to again plan on new high numbers of asylum seekers," he said.

"Some centres should have closed long ago because they are run down and not at all appropriate, but we have no choice but to leave them open."

Non-profit and rights groups such as ProAsyl have denounced the slow pace of the German bureaucracy in reacting to the sharp rise in numbers and called for more staff to process asylum applications.

"It's not just about only giving shelter to these people," said Bauer. "We also want to give them the opportunity to get a foothold in our society."