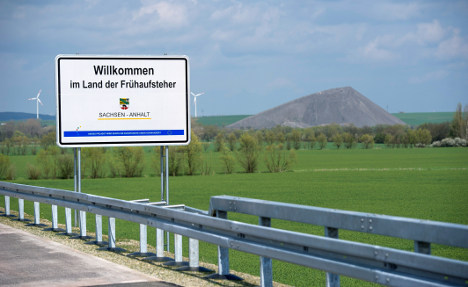 The slogan for the state of Saxony-Anhalt reads "Welcome to the land of early risers". Photo: DPA

From Munich's vaguely plagiaristic "Munich loves you" to the capital's much-derided "Be Berlin," marketing slogans for German towns and cities aren't always completely on the money.

So much scorn has been thrown about in the press over some of them that some towns have to regularly change theirs.

Former West German capital Bonn, for example, had to switch to "Freude. Joy. Joie. Bonn" after getting slammed for stating the obvious with its previous slogan "Bonn: the city."

Meanwhile, the western town of Bochum hastily switched to the questionable "Wissen – Wandel – Wir-Gefühl" (A feeling of knowledge, change, belonging) after becoming a laughing stock for its previous slogan of "Bochum macht jung" (Bochum makes you young).

Marketing teams for currently slogan-less cities such as Cologne and Hannover might want to take a look at our gallery of the strangest German town slogans to make sure they don't fall into the common pitfalls.

Have a look at the weirdest slogans here