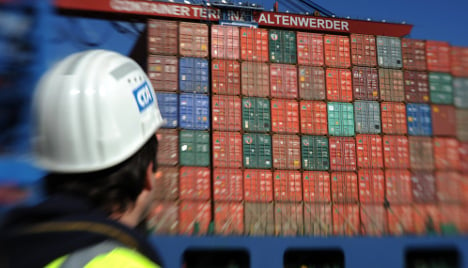 Too much of a good thing? Photo: DPA

"Nobody wants to criticize Germany for having a strong external demand and competitiveness," the EU's commissioner for economic and monetary affairs Olli Rehn said on the presentation of a new report on the matter in Brussels.

"I want see every EU member states be as competitive as Germany," he said.

But "at the same time, Germany — and to some extent the rest of Europe – would benefit from stronger domestic investment and reinforced domestic demand in Germany," Rehn said.

Rehn's report found that Germany "should aim to identify and implement measures that help strengthen domestic demand and the economy's growth potential."

And it identified low levels of private and public sector investment as part of the problem.

Germany has until now rejected criticism from the USA and EU that the national export surplus is creating problems for the wider eurozone.

But an internal Economics Ministry paper seen by the Süddeutsche Zeitung on Wednesday setting out ways to address the trade imbalance suggested the government has changed that stance.

According to the newspaper, the document admitted that “excessive and long lasting inequality” in the trade balance of a single European state is “damaging for the stability of the eurozone”.

It is therefore right that the European Commission investigates trade imbalances, the document added.

But Chancellor Angela Merkel’s spokesman Steffen Seibert said in Berlin on Wednesday that there was nothing to suggest Germany’s export success was damaging other countries in the eurozone.

Critics from both the EU and US have argued Germany must boost domestic demand to help EU partners spur export-driven growth, rather than continuing to rely on its own exports.

High trade surpluses in one country can create huge deficits in another, as has happened in the eurozone.

In 2013 the German economy had a record trade surplus of almost €200 billion.

This surplus is the result of "diverse and complex" factors, said the Economics Ministry paper, but it admitted that one of the causes was a lower level of investment in Germany than in other eurozone countries.

Investment makes up just 17 percent of total economic output in Germany as opposed to a 20 percent average across all developed countries, it pointed out.

The change of stance from Economics Minister Sigmar Gabriel of the Social Democrats (SPD) is likely to create tension between his party and coalition partners the centre-right CDU/CSU, which has vigorously defended Germany’s trade surplus as a sign of economic success.