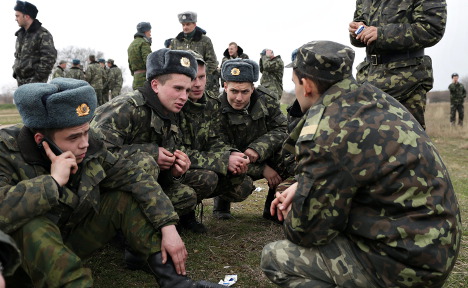 Ukrainian troops in Crimea on Tuesday.

Berlin regards the situation in Ukraine as "alarming," Seibert said.

"As a result of Russia's actions, the situation in Crimea goes against international agreements that Russia has signed up to. It's a situation which is not acceptable," the spokesman continued.

Diplomacy was the only way forward, Seibert insisted.

"It must be clear to everyone that the territorial integrity of Ukraine must be upheld," he said.

"It is of paramount importance that all sides show restraint. If there is to be a diplomatic process then everything must be undertaken to ensure the stability of Ukraine. And no action must be undertaken which could lead to destabilization," Seibert said.

According to diplomatic sources in Vienna, member states of the Organisation for Security and Co-operation in Europe (OSCE) have agreed to send military observers to Ukraine.

"We welcome that the first steps of a fact-finding mission are being taken," Seibert said.

"Talks between the international community and the Russian government, and with president (Vladimir) Putin in particular must continue," he said.

Germany and its partners are trying to support the new government in Ukraine in stabilizing the country's economic and social problems, Seibert continued.

Asked about possible sanctions against Russia, he was more evasive.

"Talks are underway to see if a contact group can be set up. These talks haven't been broken off yet. They're still ongoing but we're not over the hill just yet. It's very important that progress is made in these talks," Seibert said.

A spokeswoman for Foreign Minister Frank-Walter Steinmeier said that the minister had already warned in Brussels that "if Russia takes no steps to de-escalate the situation then measures will have to be taken on the part of the EU”.

If, for example, efforts to set up a contact group were to run aground, "then you can expect that the EU summit will table restrictive measures against Russia," the spokeswoman said.

Treatment for the injured

Meanwhile, Germany's military said on Wednesday it would fly around 50 Ukrainians injured during the unrest in Kiev to the EU country for treatment.

The move follows a request by the Ukrainian government to the German embassy in Kiev for help with the group, the defence ministry said in a statement.
"It's a question of people injured in the past weeks following the unrest on the Maidan (Kiev's central Independence Square), not from the Crimea peninsula," it said.
Independence Square became the epicentre of anti-government protests sparked when pro-Russian president Viktor Yanukovych ditched a deal with the European Union in favour of closer ties with Russia.
The German military, together with a team of doctors, will first assess the injured in Kiev and prepare them for travel to Germany, it added.
The patients will be taken to hospitals depending on the type of injury and available capacity.
SEE ALSO: Four things Germany must now do for Ukraine