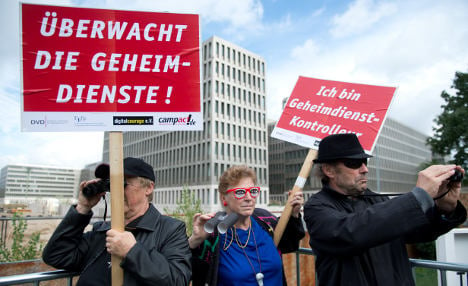 Proposed reforms will see changes to rules on how intelligence services and government leaders report to the commission that makes sure intelligence bodies work within the law.

Public trust in security services is at an all-time low after revelations from whistleblower Edward Snowden last summer raised suspicions that the German foreign intelligence service the Bundesnachrichtendienst (BND) had been passing on German citizens' communications data to the NSA.

Grave criticisms were also levelled at the domestic intelligence service, the Office for the Protection of the Constitution, for its handling of the NSU neo-Nazi terror cell, which went on a ten-year killing spree despite being monitored by the security services.

"Since the events surrounding the NSA and the NSU came to light, normal citizens have had doubts about whether the oversight of the intelligence services by their representatives is working," Social Democrat (SPD) legal affairs spokesman Burkhard Lischka told the Mitteldeutsche Zeitung on Monday.

Lischka, who belongs to the nine-member Parliamentary Committee tasked with overseeing the three branches of the German intelligence services, said the whole process must be opened up to public scrutiny.

"Until now the work of the committee has been kept as secret as that of the intelligence services. In future it will be made more transparent and efficient." Lischka told the paper.

The committee, which is set to expand by three new members if the reforms go through, also wants to be allowed to publicly reprimand the intelligence services if it feels it has not been kept in the loop on an issue, "thereby also making the matter at hand public," said Lischka.

Better communication between the bodies is also a priority, he added, with new rules requiring top government and security leaders to brief the committee on all issues discussed at their closed meetings.

Previously, intelligence heads had only told the committee about the issues they had felt were important, a loophole Lischka raised as problematic.

"The problem with the committee is that it often only hears about important events from newspapers and then starts asking questions – like with the NSU and NSA scandals," said Lischka. "That's not the point or intention of the committee."

"We have to have parliamentary oversight which acts early to prevent problems – not just review things after the event," he said.

Lischka said the reforms could be put to parliament for a vote as early as this month.