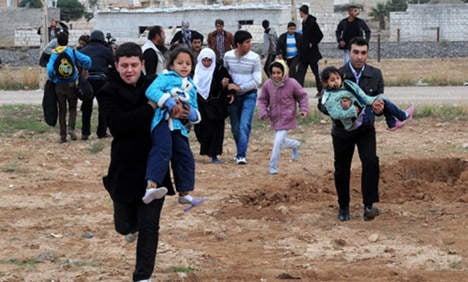 Germany agreed in March last year to take in 5,000 Syrian refugees and said in December it would increase this figure by another 5,000. But by the deadline of February 28th this year, 50,000 had applied for these extra places.

Those applying for asylum were either already in Germany or were seeking asylum on behalf of their relatives who were still in Syria.

With ten times as many Syrians seeking refuge in Germany than there are places, some are calling for authorities to increase or scrap its pledge of taking in 10,000 Syrian refugees.

Hamburg senator for the interior Michael Neumann said Germany was perfectly able to take in more refugees. “We believe increasing the numbers is needed and affordable,” he said.

Neumann said at the start of December 2013 that the number of refugees taken in should rise to 20,000.

Lower Saxony’s interior minister Boris Pistorius said: “Even the second programme of taking in [an extra] 5,000 people is far too little.”

And Günter Burkhardt, head of NGO Pro Asyl said the number should not be capped at a “rigid upper limit”.

In Rhineland-Palatine, Saxony-Anhalt and Bremen there were 1,000 applications in each state while in Bavaria the number was 1,700.

Hamburg and Thüringia would not give out exact figures.

Talks are due at the end of March between the states and federal government over the number of Syrian refugees who are offered asylum.

Since the beginning of the conflict between rebels and the regime of President Bashar Al-Assad the number of Syrians in Germany has doubled from around 30,000 to 60,000.