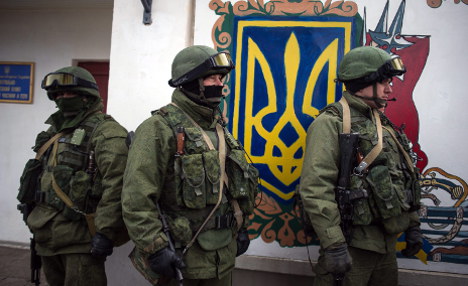 Soldiers stand outside a Ukrainian military base in the village of Perevalnoye, outside Simferopol, Crimea. Photo: DPA

Frank-Walter Steinmeier said: "We are on a very dangerous path of rising tension. A reversal is still possible. A new division of Europe can still be prevented."

"It is imperative that all those responsible desist from further steps that can only be understood as a provocation," he added.
"Anything else would lead to an escalation with uncertain, possibly dramatic consequences and undo many years of constructive cooperation for a more secure Europe."
Steinmeier was speaking after Russia's parliament approved President Vladimir Putin's request for sending troops into neighbouring Ukraine's Crimea region, triggering an international outcry.
"Russia has no right to use its military beyond the rules of the lease on the Russian Black Sea Fleet on Ukrainian territory," Steinmeier said in a statement, referring to the Russian naval base on the Crimea peninsula.
"We urgently call on Russia to refrain from any infringement of the sovereignty and territorial integrity of Ukraine."
Under the threat of a Russian intervention, the Western-backed interim government in Kiev has put the military on full combat alert.
Steinmeier added: "We are committed to ensuring that the new political leadership in Kiev protects the rights and interests of all Ukrainians.
"This includes in particular an unequivocal protection of the rights of minorities, including the use of languages."
But Steinmeier warned against excluding Russia from the G8 – a group of leading industrialized countries – in reaction to Moscow's role in the tensions rocking Ukraine.

His comment came after US Secretary of State John Kerry warned Moscow it risked losing its G8 seat over the Ukraine crisis.
"The G8 panel is the only panel where we Westerners talk directly to Russia, so should we really sacrifice this only panel?" Steinmeier said on public German television ARD.
Steinmeier said heads of government would debate the issue this week, but cautioned against any steps that could worsen the crisis.
"I think we must see how to contribute to a de-escalation of the situation in Ukraine," he said.
Unlike the United States and Russia, Germany – Europe's biggest economy – is not among the five veto-wielding permanent members of the UN Security Council.
Kerry said on Sunday Washington and its G8 allies were prepared to slap sanctions on Moscow, warning of damage to billions of dollars in trade and investment in Russia as well as possible visa bans.
Britain and France earlier announced they would suspend their participation in preparatory talks to be held before a planned G8 summit in Sochi in June.
The United States warned on Friday that President Barack Obama and other European leaders could snub the Sochi summit altogether if they judge Russia is usurping Ukraine's sovereignty.
SEE ALSO: Berlin 'deeply concerned' about Ukraine tension