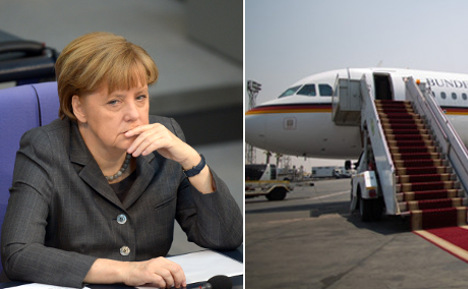 The gatercrasher started a one-man party on Merkel's A319. Photo: DPA

The 25-year-old, named by the media only as Volkan T., suffers from schizophrenia and prosecutors believe he should not be found guilty of any criminal offence. Instead they are calling for him to be detained in a psychiatric hospital.

The bodybuilder told the court he could not remember what happened on the evening of July 25th last year.

When asked by the Cologne state court on Thursday if he knew anything about aviation he said he had never flown before, not even on holiday.

Already high on drugs, Volkan T. entered the plane, which was parked in a supposedly secure part of Cologne airport, by telling guards he was going to a wedding. He then climbed over a barbed wire fence to get to the jet.

After climbing in through the emergency exit clutching a bag of ecstasy and marijuana, he pressed buttons in the cockpit, sprayed foam from a fire extinguisher around the jet’s plush interior and jumped on the wing of the Airbus A319. He even released the emergency slide.

The full details of the embarrassing intrusion were made public by Die Welt newspaper, which said that rather than rush to remove the intruder once he accidentally pushed an alarm button in the cockpit, security services took several hours to arrest him.

It will be discussed in the trial how  Volkan T. could access the plane which is also used by President Joachim Gauck.

He faces charges of dangerous invasion of an aircraft. The court will pass judgement on March 5th.

READ MORE: Car 'arrests' man who broke in to steal