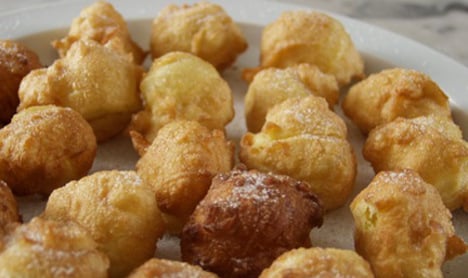 Nonnenfürzchen anyone? Photo: Spoonfuls of Germany

Growing up in Frankfurt I did not know much about carnival traditions until I attended university in Bonn in the centre of the German Karneval tradition, the Rhineland.

The French-German student club I joined in my second year of university planned to host a group of students from Bonn’s partner city Toulouse to introduce them to Karneval.

So in November I went with another student to the large warehouse where the wagons for the parade were being built.

We interviewed the volunteers at work but could not take any photos, as the themes of the wagons are well-kept secrets until the last minute.

In the back of the warehouse was a large workshop where women, also all volunteers, were sewing the costumes for the many participants in the parade. Karneval season in German officially starts on November 11th, but for the ones behind the scenes, it is a year-long undertaking.

The most memorable event of all was the women’s carnival (Weiberfastnacht) on Shrove Thursday in the city district of Beuel across the Rhine.

The square in front of the town hall was packed with women, some of them in long old-fashioned dresses and large hats decorated with fruits and vegetables.

Many women had a string around their neck with a plastic egg holder attached to it. Those were improvised shot glasses for the booze that was passed around freely.

None of the few men in the crowd wore a tie – on Shrove Thursday, women are allowed to cut off the tie of any man in the street.

The staged stand-off between the women and the authorities culminated with the women climbing on ladders and storming the town hall.

The mayor appeared on the balcony, symbolically handing the key to the women who are then taking over the city.

Eventually the mayor sat on a dromedary and rode away. Like the French students, I watched all of this with my eyes wide open. Being in a foreign country could not have felt more exotic.

For my remaining years in Bonn, I escaped Karneval like many people do, leaving town before Shrove Thursday and returning on the morning of Ash Wednesday.

I lived on a street where the big parade passed and tonnes of candy were tossed into the crowd lining the street. Although the street cleaning crews passed through afterwards, for a few days I always ended up with some crushed candy stuck under my shoes.

There are many different German carnival pastries, always deep-fried, because traditionally all the lard had to be used up before Lent starts on Ash Wednesday.

Nonnenfürzchen or Nonnenfürzle, also known as “Nun’s Puffs” in English, are based on a choux pastry. If you understand German, never mind the name, it does not mean what you think. It is based on middle-low German and means “what nuns do best”.

Oil for deep-frying (corn, peanut or other oil with high smoke point)

Sugar and cinnamon for sprinkling

1. Put the water, salt and butter in a small saucepan and slowly bring to a boil until the butter is melted. Stir and remove from the heat.

2. Mix the confectioners’ sugar, flour, lemon zest and cornstarch. Add it to the pan all at once. Stir to combine and return the pan to the heat. Cook over low heat until the dough forms a smooth dough and a film forms at the bottom of the pan.

3. Remove the pan from the heat and immediately add one egg. Beat with an electric handheld mixer to blend well. Let the dough rest for 10 minutes.

4. Add the remaining eggs one after another, blending well after each addition.

6. Using two dessertspoons, shape small balls of dough and drop them into the hot oil, not more than 4 at a time. Fry until golden, then turn once and fry from the other side. Remove with a slotted spoon and degrease on paper towels. Dip the spoons in hot water after each round (be careful of hot splashes!).

7. Sprinkle with a mix of sugar and cinnamon. Enjoy within a couple of hours.

Expat Dispatches is a weekly post from an English-language blog in Germany covering everything from lifestyle and food to history. Email [email protected] to have your blog considered for publication.