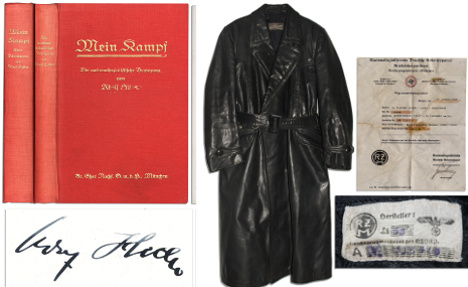 The two-volume set – a first edition and a second edition – of the future German Führer's political manifesto will be sold online to the highest bidder on Thursday, according to Nate D. Sanders Auctions.

Both volumes are signed by Hitler and are dedicated to Josef Bauer, an early Nazi party member and a leader of the 1923 Beer Hall Putsch bid to overthrow the Bavarian government.
Hitler likely gave them to Bauer as Christmas gifts in 1925 and 1926, expressing best wishes for the holiday season, the auctioneers said.
They called the books "an ominously signed set of books that futilely warned the world of Hitler's intentions," adding they were more scarce for being signed to a fellow Nazi leader.
The young Hitler wrote "Mein Kampf" ("My Struggle") in prison, setting out his political doctrine and blaming Germany's woes on an array of groups including Jews and Marxists.
After Hitler's rise to power in 1933, millions of copies were published. As of 1936, the Nazi state gave a copy to all newlyweds as a gift.
The leather jacket of Hitler's chief architect Albert Speer is also being auctioned.
Nate D. Sanders Auctions said Speer possibly wore the jacket when he visited Hitler for the last time on April 23rd, 1945.
Inside the overcoat are labels bearing Speer’s name, the brand name of W. Fliegner and the initials of the Reichszeugmeisterei, the German regulatory office for quality control in manufacturing.
The RZM label depicts the eagle emblem denoting the Nazi elite. Also included is the original invoice for the coat with Speer's name printed on it, found stored in the coat’s pocket.

The auctioneers said that the coat was seized after the war by an Allied soldier named “Ralph,” who wrote a letter to his mother about his adventures.

Dated May 6th, 1945, the letter states that he “looked around today in a huge chalet of a high-ranking Nazi. For you I have a gold necklace. And for Dad, I have a great leather jacket…I took a coat with no Nazi symbols on the outside…Unfortunately, the name of Nazi Albert Speer is stamped in the jacket.''

Speer was the chief architect for Hitler before serving in the Nazi cabinet as Minister of Armaments and War Production. After World War II, Speer was convicted of war crimes at the Nuremberg Trials and imprisoned until 1966. He died in 1983.