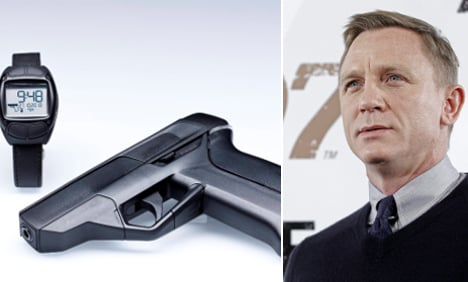 The weapon can only be fired by the owner, much like Bond's gun in Skyfall. Photo: Armatix GmbH/DPA

The iP1 is controlled by a chip in the wearer's watch. The watch and the gun must be at close range with each other for the gun to work and means that only the wearer of the watch can fire the gun.

It echoes the latest James Bond film Skyfall where the agent's gun is equipped with palm print technology which recognizes Bond as the owner.

Munich-based makers Armatix explains on its website that the user must enter a pin code into the watch in order to unlock the gun and be able to fire it. It is, the 30-person company hopes, a safer approach to firearms.

The company said: "As soon as the gun loses radio contact with the watch – e.g. if it is knocked out of the shooter’s hand or in case of loss, theft, etc. – it automatically deactivates itself."

Supporters in the US are hailing the iP1 as revolutionary, Bild newspaper reported, as the weapon's launch comes amid a push for better gun safety.

Yet others remain doubtful – at €1,019 it costs twice as much as a 40-caliber Glock and, weapon-lobbyists said, is too complicated to use under pressure.

SEE ALSO: Nazis wanted to use mosquitoes as a weapon