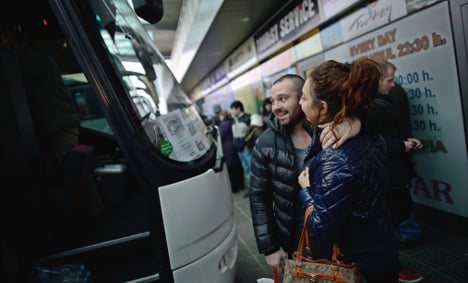 Bulgarians at a bus stop in Sofia heading for Germany. Photo: DPA

In the last two years, around 200,000 Bulgarians and Romanians have left Germany, figures provided to The Local by the Federal Statistics Office (Destatis) show.

Since Bulgaria and Romania became full EU members in 2007, regulations limited immigration to Germany from the new member states. The last of these restrictions were lifted on January 1st 2014.

But figures show that while immigration from the EU's newest members is growing fast, numbers of people moving back from Germany to Bulgaria and Romania are climbing even faster.

Figures for the final quarter of 2013 are not expected until May.

Dr Jochen Oltmer, Professor at Osnabrück University's Institute for Migration Research and Intercultural Studies, told The Local that the accelerating emigration was not unexpected.

He said most Bulgarians and Romanians in the country stay no longer than a few years which accounts for some fluctuations in migration rates.

Many are students who come over for "a couple of semesters", or professionals for a few years' work experience, before returning home, he explained.

Departures to Bulgaria, meanwhile, grew by 11 percent in the first three quarters of 2013 compared to the same period the year before.

If the number of people leaving Germany for Bulgaria and Romania is taken into account, the net figure for immigration from Romania increased by only nine percent between 2012 and 2013 – from 41,684 to 45,484.

The thrust of the debate on immigration from the eastern states has centred on fears that January's deregulation could cause an "immigration flood".

But the absence of any such immigration emergency was "to be expected," Oltmer said.

"People have been able to immigrate [from Romania and Bulgaria] for years and restrictions were first liberalized in 2012," he said.

He told The Local the most important immigration-related challenge for Germany's government was actually "to communicate to the population that there are overwhelmingly more opportunities that come along with immigration than there are dangers".

Nora Hesse from think-tank Open Europe Berlin, who is originally from Bulgaria, said many young Bulgarians came to Germany simply to study and then returned home.

“They may also struggle to find a job where they earn enough money to send home,” she told The Local.

According to the statistics from Destatis the biggest immigration spike came from Italy between 2012 and 2013.

Germany has become the destination of choice for most Italians looking to start a new life abroad, Frankfurt Allgemeine Zeitung reported last June.

Spokesman for the Goethe Institute in Rome Susanne Höhn told the newspaper the biggest demographic choosing to migrate was "Germany-fans: motivated people around 30 who want to leave their family home, start their own family and find a stable, promising career".

Growing immigration from Italy gets less attention than Bulgaria and Romania because there is a "long migration relationship" between Germany and Italy, according to Oltmer.

"The migration from Italy to Germany has been going on for several decades – there are a lot of Italians who have family connections with Italians living in Germany who moved here years ago," he said.

And "the economic crisis in Italy means immigration is especially high at the moment," he added.

The background of this "migration relationship" means immigration from Italy is seen as "unproblematic and normal", he said.

In contrast immigration from the eastern states is often seen as "poverty migration" and gets "scandalized," despite this being false, Oltmer added.