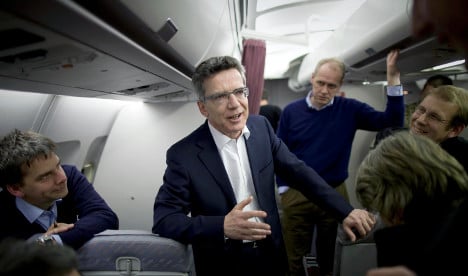 Bild am Sonntag newspaper said that 320 political and business leaders in Germany were being monitored by the US National Security Agency (NSA), including Interior Minister Thomas de Maiziere.

"We have the order not to allow any loss of information whatsoever after the communication of the chancellor no longer being able to be directly monitored," Bild quoted an unnamed high-ranking US intelligence employee in Germany as saying.

Last month, US President Barack Obama said the US intelligence service would continue to spy on foreign governments but assured Merkel that he would not let intrusive surveillance harm their relationship.
Bild also quoted US National Security Council spokeswoman Caitlin Hayden as saying that the administration had made clear the US gathers the same kind of intelligence as all advanced nations.
US intelligence gathering is not aimed at helping US companies gain a competitive advantage, she was also quoted as saying.
The report sat awkwardly alongside an interview with German Foreign Minister Frank-Walter Steinmeier, published in Spiegel magazine on Sunday, in which he expressed his belief that the United States had learned its lesson about spying on allied countries.
Steinmeier told the magazine that he was sure US surveillance of political leaders in friendly nations was at an end.
"Washington has hopefully understood that the type of contact with its partners can also have a political price," Spiegel quoted Steinmeier as saying in response to a question about US surveillance of Germans.
"I am sure that surveillance of the political leadership of friendly states is finished."
Steinmeier appeared to back away from a "no spying" agreement that Germany has been pushing for in the wake of the scandal, saying he was doubtful that it will "bring us much further".
Germany is especially sensitive to mass state spying on citizens due to memories of methods employed by the Stasi secret police in the former communist East.
SEE ALSO: Merkel targets Facebook in Euro-web privacy push