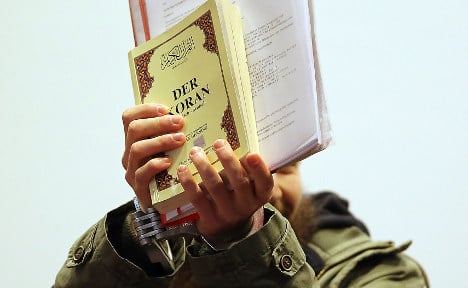 More than 270 German-based Islamists are thought to have travelled to Syria either to fight alongside the rebels, or to otherwise support the uprising against President Assad, the BfV German domestic security service told The Local.

This is an increase of 30 people since December and some fear returning, battle-hardened, radicalized Salafists could pose a threat to public safety.

In December BfV president Hans-Georg Maaßen told the Neue Osnabrücker Zeitung: "I see no change in the abstract, high danger of terrorism in Germany."

"You have to see it as a realistic danger," he added referring to the risk of trained fighters returning from Syria.

But chaos in the war-torn region made keeping track of the growing number of Germans there difficult, BfV spokeswoman Elke Altmüller told The Local.

As a result the intelligence service said it had no exact figures on how many Germans have been in Syria and come back.

"Information is not always available whether these persons stayed in Syria," Altmüller said in a statement.

Altmüller said most of those known to have visited Syria at some time during the conflict had not been directly involved in the fighting.

But the service is monitoring "up to a dozen" who now living in Germany and fought with Syrian rebels.

Salafists – members of a movement within Sunni Islam – are the fastest growing Islamist group in Germany, a problem Maaßen described as "cause for concern." Whilst by no means all Salafists are radical, the movement is often associated with Jihadist preachers in the West.

Recruitment drives typically take place in shopping centres, at markets or in front of schools, said Maaßen, where Salafists can regularly be found handing out copies of the Koran.

"Again and again there are cases where we see that people who travel to Syria have been approached during these Koran distribution campaigns," he said. The service had made a clear connection between individuals talking to Salafists at these stands and then forming plans to leave for Syria.

Young German Islamists and converts are thought to be attracted by the relatively simple journey overland to Syria from Turkey, where they may enter visa-free on a German passport, the BfV believe.

Travelling to Syria is more realistic than attempting to journey to the tribal areas of Taliban-held Waziristan in north-western Pakistan, for example.

The recruits go in search of experience – and sometimes even a form of military training and hope to gain respect of their peers as a "veteran" when they return.

In October, Der Spiegel news magazine reported that around 200 fighters had formed a "German Camp" in northern Syria.

"Many people of German origin who convert become radicalized very quickly and then some time later even die fighting in Syria," said Maaßen. The BfV has information on 15 German Islamist fighters thought to have been killed there since the conflict began in 2011.

In November last year, the death of former Germany youth footballer Burak Karan in a bombing raid on the Turkish-Syrian border raised eyebrows in the press.

The former teammate of football pros Kevin-Prince Boateng,  Sami Khedira and Dennis Aogo had last been heard of hanging around a mosque in Wuppertal, where radical Salafist preachers are thought to be at work.

With Salafist Jihadist recruitment drives stepping up across the country, the BfV say it has its work cut out trying to prevent new, mainly young converts leaving on the overground route to join and support the Syrian rebel forces.

Last November, authorities caught two men outside Stuttgart who had said they had been heading for Aleppo in north Syria.

They were apprehended heading towards the southern German border in a clapped out Ford Focus armed with medical supplies, binoculars, camouflage clothing and tools, wrote the FAZ newspaper at the time.

Police had received a tip-off after the 23-year-old Lebanese man and 37-year-old Afghan man had walked into a traditional German hunting store in Stuttgart looking for a night vision device for a sniper weapon.

Yet many more slip through the net, with the BfV putting the number they have successfully stopped leaving Germany in the "low double digit range."

The danger posed by returning Islamist fighters depends on how long spend in Syria and the intensity of the combat they see, Altmüller told The Local.

Few of those who travel there from Germany are much use in battle, can speak Arabic or have ever held a weapon.

The BfV estimates that the large majority of German recruits are confined to non-combat missions.