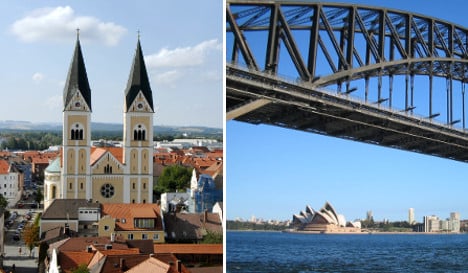 Many of them want to know when I’ll be home and it takes a moment or two to discern what they mean.

When am I going home? Or when am I coming home? I’m going home in a couple of weeks, but I’m not coming home at any point in the foreseeable future for a variety of reasons and a motley collection of hard-earned or accidentally-collected anchors.

This trip has been a different one. Up until it, my partner and I have always talked about the possibility of us moving to Australia – a move that would entail ripping up more roots than I did when I moved simply myself and a suitcase to Germany on a wing and a prayer and a working holiday visa.

We have talked about the lifestyle Australia can offer us, with the mild weather and beautiful environment of Sydney tugging with quiet but relentless strength.

Up until this trip, the answer to ‘and when are you home?’ has been along the lines of, ‘we’d love to come and live in Australia if we can, perhaps a few years down the track.’

Up until a few weeks ago, I was comfortable with that quiet, relentless tug that creates the oft-repeated answer. It’s simply a part of how I have chosen life to be. And I always assumed that, one day, and probably not too far in the distant future, that one final tug would win, toppling me sideways and pulling me back down here.

And if that meant pulling my relationship and that motley collection of anchors with me, then we’d try and make that work, haul ourselves over that bridge when we came to it.

But then, a few weeks ago, we were walking along the Yarra river in Melbourne on a scorching summer’s day, jet-lagged and sticky.

The conversation that, by now, is worn with use, familiar as a winter coat come February, bubbled up between us once more; would we, could we, make the move to Australia.

And as we talked, about costs and employment and education and property and lifestyle and the logistics of relocation, I waited to feel it, that obvious little twinge that always reminds me of where I come from and how brightly that burns inside. And I felt it, I always will.

But I also felt something else – something else that had bumped in alongside that twinge. Something had picked up the other side of the rope and was matching Australia, pull for pull, tug for tug.

It was a simple realization, one almost too simple to pass comment on, one I feel strange even calling a realization, because how had I not known it before? Or was it so simple, so normal, it wasn’t noticeable, or rather, worth noticing?

It was a realization of like. I like my lifestyle in Germany. All of the little pieces that make it what it is, I like them. In fact, many of those pieces, I love.

And beyond like and love, there is the even simpler issue of capability. I can do it. I can live here. I can, and I have, made a little patch of a foreign country, my own. Even before listing the positives, the obvious ones, the ones that go head to head with those of Australia’s list, the fundamentals are there. The cement has dried on the foundations; I like it and I can do it

So we will, for the foreseeable future. And how lucky I am, that I can come and go and always find a home, and people who will hold my history while I’m gone.

Liv Hambrett is an Australian blogger and writer and has lived all over Germany. Her current home is Weiden, Bavaria. You can read more from her blog here. Check out Liv’s book, ‘What I know about Germans’.