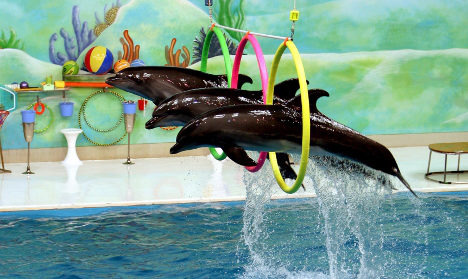 Negotiations with the German-based Whale and Dolphin Protection Forum (WDSF) resulted in trips to orca and dolphin shows being dropped from its catalogues, TUI, one of the world's biggest tour operators, said at the beginning of February.

The ban was put in place as TUI said it could not check conditions at all of its destinations.

Animal protection groups have long criticized conditions at dolphinariums around the world, but particularly in Turkey, Dubai and Egypt.

But when asked by The Local why trips to dolphin and orca shows are still being advertised and sold on TUI’s UK site, Thomson.co.uk, a spokeswoman said the ban only applied to German customers.

It means TUI branches and websites based outside of Germany will continue to sell trips to the shows.

TUI said it had introduced the German-only ban because the debate around the welfare of the animals was a “very sensitive” issue in Germany.

“There are national differences in the debate around animal protection,” a TUI spokeswoman told The Local.

The spokeswoman said the ban by TUI Germany was in effect immediately.

But she also said the travel operator would not rule out trips to “responsible” and “professional” attractions which had dolphin shows such as SeaWorld in Florida and California. The destinations are considered to be zoos and theme parks, she said.

The spokeswoman said: “Animal welfare is of utmost concern to TUI."

She added that it was not uncommon for TUI’s national branches to pursue different policies.

But Dr Karsten Brensing, from Whale and Dolphin Conservation (WDC), told The Local the ban was "confusing". "From my point of a view it is a compromise," he said. "I believe the decision was based on public pressure and it was a way to show that they were doing something."

Brensing said his organization would be putting pressure on TUI to make the ban company-wide and on other travel operators.

The conservation expert, who studied dolphins in captivity for his doctorate, said one of the main problems with dolphin and orca shows was their reliance on taking dolphin calves from the wild, as they were unable to run successful breeding programmes with captive animals.

Global attention was focused on dolphin welfare last month when 250 dolphins were herded into a Japanese bay for an annual capture and slaughter.