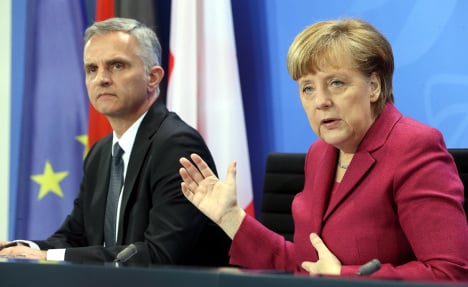 Swiss President Didier Burkhalter with Merkel at a press conference in Berlin on Tuesday. Photo: DPA

In a Berlin joint press conference with Swiss President Didier Burkhalter, Merkel said Germany should watch how Switzerland implements the changes over the next three years.

"The task now is to deal with the result so that relations between the European Union and Switzerland remain as intense as possible, while respecting this referendum," she said.

"We have a transition period of three years, and now we have to find adequate solutions," she said, cautioning against tit-for-tat countermeasures.

"It's not right to say that because one side has done something in one area, the other side says in another area that nothing goes anymore," said the chancellor.

A narrow 50.3 percent of Swiss voters on February 9th approved an initiative to void a pact giving equal footing to EU citizens in the Swiss labour market.

The vote in favour of the "Stop Mass Immigration" initiative, put forward by the right-wing populist Swiss People's Party, could freeze other Swiss-EU deals, including on trade.

Brussels said on Sunday that it had suspended Swiss participation in EU research and education programmes after Bern called off a deal opening labour market access to Croatia within a decade.

Burkhalter said the immigration "decision was taken democratically in Switzerland" and was constitutionally binding but "not yet applicable law, not everything has changed since February 9th."

Switzerland is not a member of the EU but counts the bloc as its main trading partner.

Burkhalter said Switzerland wants even closer links with Germany, stressing that annual two-way trade amounts to €75 billion, about half of that between Germany and China.

Germany's yearly trade surplus with Switzerland of 11 billion euros matched its deficit with China, he said, meaning that "with Switzerland it can compensate for China".

In a day of what Swiss media called "diplomatic ballet", Burkhalter was heading to Paris after his visit with Merkel to meet with French Foreign Affairs Minister Laurent Fabius.