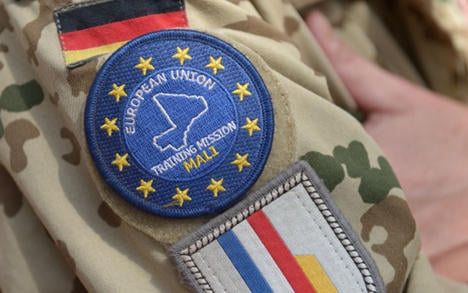 "France and Germany have decided to send elements of the Franco-German Brigade to Mali: the first deployment under the aegis of the EU and in an African location," a statement said after a security and defence meeting in Paris between the two countries.

In January last year France intervened in Mali to push back Islamist insurgents who had taken over much of the northern part of the country.

The statement said the troops sent would integrate into a European mission in Mali to train soldiers. The mission was launched in February last year and has already trained nearly 3,000 Malian forces, but it did not specify the number of troops involved.

The Franco-German brigade, which was set up in 1989 to increase military cooperation between the World War II-era foes, comprises some 4,800 troops based in both countries.

Mali was thrown into chaos in 2012 when Tuareg separatist rebels launched an offensive in the northern desert helped by Islamist militants linked to Al-Qaeda, after the country's president was toppled in a coup.

The Islamists were driven out after nine months by a French-led military intervention launched in January 2013. But they are regrouping in the desert and remain an ever-present threat to security.

Chancellor Angela Merkel and President Francois Hollande are holding a summit on Wednesday to discuss a range of issues between the two countries.