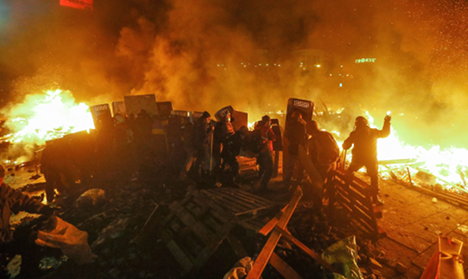 “The images are shocking and we feel for everyone suffering under the violence,” Merkel told journalists in Paris. She said it was important that political dialogue opens with Ukraine as it was "the only way that progress will be made".

The French, German and Polish foreign ministers are heading to Ukraine on Thursday after the deadly escalation in the country's political crisis, French Foreign Minister Laurent Fabius said.

Meeting with US Secretary of State John Kerry on Wednesday, Fabius called for "restoring political dialogue between the opposition and the government"
and said the three ministers would travel to Ukraine before emergency talks among EU ministers in Brussels.

EU foreign ministers would be meeting on Thursday to “decide exactly which sanctions to put in place” in order to send a stern message, said Merkel.

"Ukraine has paid dearly for the delaying tactics of President Yanukovych," said Foreign Minister Frank-Walter Steinmeier earlier on Wednesday. "Everyone must know that violence is no solution and only makes everything much worse," he added.

"His refusal to hold serious talks about a peaceful conflict resolution and constitutional reform is a big mistake," said Steinmeier, adding that Ukrainian security forces had a "special responsibility to de-escalate" the crisis.

On Wednesday morning the country's health ministry announced that at least 25 people had died in violent clashes overnight. The Süddeutsche Zeitung newspaper said that one of these has been confirmed as being a journalist.

Another 1,000 people, including police officers and protesters, are reportedly injured and the toll continues to rise.

“Human life would seem to no longer count for much in Kiev,” a Spiegel correspondent at the scene reported.

During a visit to Berlin on Monday leading Ukrainian opposition figures Vitali Klitschko and Arseniy Yatsenyuk asked Chancellor Angela Merkel for financial aid, and also called for sanctions to be imposed on Ukraine's political leaders.

Steinmeier also called on Tuesday on all parties in Kiev "to distance themselves from any provocation in this overheated situation".

Ukrainian riot police approached Kiev's main opposition camp on Tuesday after at least seven people were killed in the bloodiest day of clashes in nearly three months of protests.