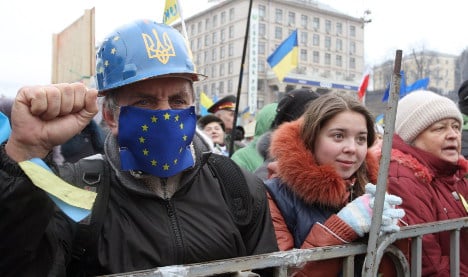 Anti-government protests have been raging for close to three months in Ukraine, with demonstrators occupying Kiev's central Independence Square and other buildings in a bid to oust President Viktor Yanukovych.

"We need help. We don't need words, we need action," Arseniy Yatsenyuk told tens of thousands of protesters on the square.

"We want Europe to say clearly what package of economic measures it can offer us."
Yatsenyuk, a pro-EU former foreign minister, and boxer turned opposition leader Vitali Klitschko, are due to meet Chancellor Angela Merkel in Berlin on Monday.
He said that in addition to financial aid, he would also call at the meeting for Ukrainians to be allowed to travel in Europe without a visa.
The unrest sweeping Ukraine erupted in November when Yanukovych ditched a key EU trade pact in favour of closer ties with giant neighbour Russia, angering pro-EU parts of the population.
Aside from its domestic resonance, the protest movement took on a wider geopolitical dimension as Russia and Western countries tussled over the political future of Ukraine.
Moscow has since announced it will give Kiev a $15-billion bailout – of which $3 billion has already been paid out – and a large reduction on the price of gas imports from Russia.
The European Union has said it stands ready to extend conditional financial assistance to Ukraine in cooperation with the International Monetary Fund and other global players but only on condition that reforms are implemented.
Last year the EU had said it was ready to provide Kiev with a loan of $825 million if it adopted a comprehensive economic restructuring package prescribed by the IMF.
READ MORE: Merkel 'blocks aid for Greece' ahead of EU elections