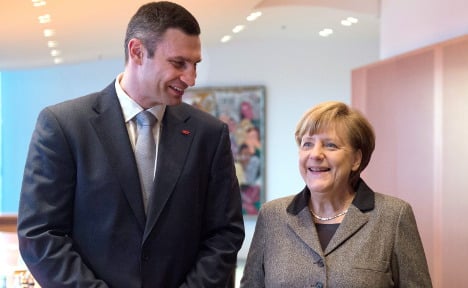 Merkel stressed that Germany and the EU would do everything to contribute towards a "positive outcome" to the country's worst post-Soviet crisis, her spokesman Steffen Seibert said in a statement.

A law dropping criminal charges against hundreds of protesters came into force on Monday, a day after demonstrators left municipal buildings occupied in December, in a small step to resolving the crisis.

"The agreement on an amnesty for demonstrators is, in her opinion, a positive step," Seibert said referring to the chancellor. "Now, however, things mustn't stop; now the point is to energetically push ahead with progress on forming a government and reform of the constitution," he added.

Merkel, together with Vitali Klitschko, a former champion boxer turned opposition leader and Arseniy Yatsenyuk, another opposition leader, agreed in their talks in Berlin that the situation remained "extremely tense", he said.

Yatsenyuk, a pro-EU former foreign minister of the Batkivshchyna party of jailed opposition leader Yulia Tymoshenko, told a news conference after meeting Merkel, that "European partners" were "ready to support" the Ukrainian opposition.

The European Union has said it stands ready to extend conditional financial assistance to Ukraine in cooperation with the International Monetary Fund (IMF) and other global players, but only on condition that reforms are implemented.

Last year the EU had said it was ready to provide Kiev with a €610-million loan if it adopted a comprehensive economic restructuring package prescribed by the IMF.

But on Monday Russia said it would release $2 billion in aid to Ukraine this week.