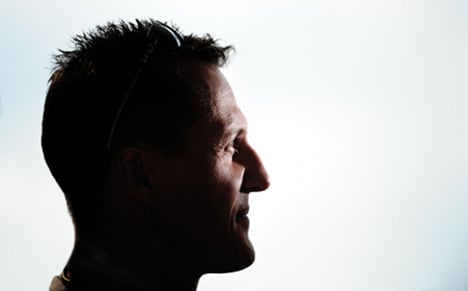 Albertville prosecutors said the probe into the December 29th accident, which has left Schumacher fighting for his life in hospital, was not caused by any breaches of the law.

The criminal investigation, launched just days after the former Formula One driver fell and hit his head on a rock, has been classed as "sans suite" meaning no further action will be taken.

“There were no infractions by any party. The accident occurred in an off piste area,” said prosecutor Patrick Quincy in a statement.

The prosecutor noted that “signalling and marking” of the off piste area where Schumacher fell and hit his head on a rock and “the information given on the limits of the piste" adhered to French legal standards.

There had also been speculation since the accident that it may have been caused by faulty skis, but this has already been ruled out by prosecutors.

In January Quincy also poured cold water on suggestions that Schumacher's speed was also to blame.

He said that the skier's speed was "not a particularly important factor to them".

Schumacher was going at an appropriate speed for a skier of his level, Quincy said. The camera attached to Schumacher's helmet revealed that he was descending at the rate of "a very good skier on fairly hard terrain" although the fomer Formula 1 driver "did not look to reduce his speed when he went off-piste".

Schumacher was only around 8 metres off-piste between a red and blue run when he hit a rock beneath the snow causing him to fall and smash his head against another rock.

The former F1 driver has been in a coma in a hospital in Grenoble since the crash.

Last week his family released a statement saying he was "still in a waking up process" which could take a long time.

That statement came a day after Germany's biggest-selling newspaper, Bild, reported that Schumacher had contracted a lung infection, and days after rumours that he had died swept social media.

The statement said: "Michael's family would like to again express their sincere thanks for the continuous sympathy coming from all over the world. The good wishes they receive help the family and, we are convinced they also help Michael, who still is in a waking up process.

Schumacher crash: What happened and when?

December 29, 2013: Schumacher slams his head during a fall in a boulder-strewn section of the French Alpine ski resort of Meribel.He is wearing a helmet but it is smashed into two pieces and he is evacuated by helicopter.

Doctors operate on Schumacher in Grenoble and place him in a coma, with a body temperature lowered to between 34-35C (93.2-95 F) owing to "serious brain trauma".

December 30: Schumacher is in a "life threatening" condition and has a second operation to treat bleeding in the brain.

December 31: Schumacher's manager Sabine Kehm tells media the former race-car driver was skiing with friends and son Mick, and insists he was not going fast when the accident happened.

January 1, 2014: A day before Schumacher turns 45, Kehm tells reporters that his condition is "stable".

January 3: The French daily Le Dauphine Libere says police are checking a camera that was mounted on Schumacher's helmet.

January 6: Doctors say Schumacher's state is critical but stable, a source close to the family speaks of a "slight improvement".

January 30: Doctors have started to reduce medications that keep Schumacher in a coma, but Kehm says it might be awhile before he is conscious.

February 17: French officials close a criminal investigation into the accident, concluding that it was not due to safety breaches.