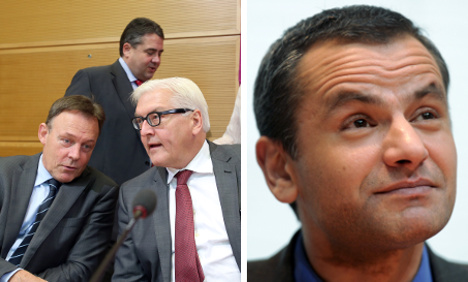 Friedrich, from Chancellor Angela Merkel's centre-right party the Christian Social Union (CSU), told the SPD chairman, Sigmar Gabriel, about the investigation and Edathy’s name allegedly being mentioned in it.

Political opponants have accused him of therefore breaching confidentiality.

Christian Schmidt (CSU), parliamentary state secretary for the development ministry, will replace Friedrich as agriculture minister, it was announced on Monday.

But Schmidt’s appointment has not eased tension between the centre-right Union and the centre-left SPD.

The CSU is bitter that one of its ministers has resigned over a case affecting the SPD and it has demanded an explanation from the Social Democrat’s parliamentary leader.

A planned coalition committee meeting on Tuesday between the SPD and Union has been cancelled.

Instead the three leaders of the SPD, CDU and its Bavarian sister party the Christian Social Union (CSU) will meet in Berlin to discuss the Edathy case, in what the German press described on Monday as an “emergency summit”.

A press conference being held by the SPD on Monday afternoon will also no longer be led by the party’s secretary general, Yasmin Fahimi, but by SPD leader and Germany’s vice chancellor, Sigmar Gabriel.

The CSU appears to be reserving its fiercest criticism for the SPD’s parliamentary leader Thomas Oppermann who was told by Gabriel about the affair.

The information about Edathy was shared by Friedrich and given to Gabriel in October 2013 to apparently stop rising star Edathy getting a top job in the coalition government.

He also said he held a telephone conversation in October with the head of the Federal Office of Criminal Investigation (BKA), Jörg Ziercke.

Spiegel Online reported on Monday that prosecutors are examining whether to investigate Ziercke over a violation of secrecy by reportedly telling Oppermann about the case.

Oppermann said on Thursday that he had phoned Ziercke in October to confirm that Edathy was being investigated.

But Ziercke disputed Oppermann’s version of events and the SPD politician said on Sunday in the Bild newspaper that the police chief had given him “no details”.

Seehofer added that the SPD had not satisfactorily answered questions about the scandal such as who knew about the Edathy allegations and when they found out.

But he added: “It is about working together with trust in the coalition and not about breaking up the coalition.”

Meanwhile, head of the parliamentary home affairs committee Wolfgang Bosbach (CDU) also spoke of a “crisis of trust” in an interview with broadcaster ZDF’s morning news programme on Monday.

He told the programme the “ball was in the SPD’s court” with regards to rebuilding the shattered trust.

Edathy’s home and office were raided last Monday. The state prosecutor in Hannover said on Friday that the case involved photos of naked boys aged between nine and 14 years old, but the 44 year-old denies the allegations.

Edathy came to national prominence last year when he chaired the parliamentary investigative committee into the failures of the authorities when investigating the series of murders later attributed to the NSU neo-Nazi terror group.