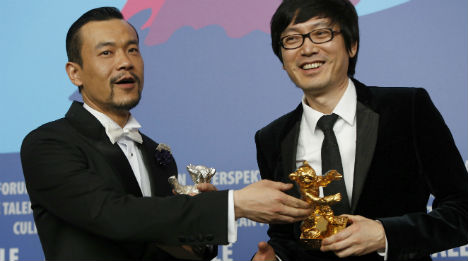 “It's really hard to believe that this dream has come true,” Diao said as he accepted the trophy, fighting back tears.

It was the first Chinese film to win in Berlin since the unconventional love story “Tuya De Hunshi” (Tuya's Marriage) by Wang Quan'an brought home the
gold in 2007.

In a remarkably strong showing for Asian contenders, the Berlinale, Europe's first major film festival of the year, gave its best actress prize to Japan's Haru Kuroki for her role as a discreet housemaid in wartime Tokyo in Yoji Yamada's “The Little House” (Chiisai Ouchi).

The picture starring Ralph Fiennes had opened the Berlinale on February 6. Anderson noted in an acceptance speech read out by US actress Greta Gerwig, a member of the jury, that it was his first award at a film festival.

Texas filmmaker Richard Linklater, who shot his innovative coming-of-age drama “Boyhood” over more than a decade with the same actors and was widely tipped to take the Golden Bear, won best director.

“This says best director but I want to think of it as best ensemble,” said Linklater, clutching the trophy.

Best screenplay went to the German siblings Dietrich and Anna Brueggemann for their wrenching drama “Stations of the Cross” (Kreuzweg) about a teenager who makes the ultimate sacrifice for her fundamentalist Catholic family.

And the second of three Chinese films in competition in Berlin, “Blind Massage” (Tui Na) featuring a cast made up in part of amateur blind actors, captured a Silver Bear prize for outstanding artistic contribution for cinematographer Zeng Jian.

A nine-member jury led by US producer James Schamus (“Crouching Tiger, Hidden Dragon”) handed out the prizes at a theatre in the German capital.

“Black Coal, Thin Ice” is set in the late 1990s in the frosty reaches of northern China and its murder mystery plot is told through enigmatic flashbacks. It is Diao's third feature film.

Diao said he saw his film as bridging the gap between pure arthouse cinema and multiplex fare.

“I finally did find the right way to combine a film which has a commercial aspect to it but which is nonetheless art, so that it's possible to launch it in these terms,” he told reporters after the awards ceremony.

He said Chinese films were gaining ground in Western cinemas thanks in part to their exposure at major film festivals.

“Every time that we take our films abroad it seems that there is an ever greater enthusiasm for Chinese cinema,” he said.

“Black Coal, Thin Ice” divided audiences in Berlin but won over many critics.

Movie news website Indiewire noted that buzz about the picture had been strong before its screening “on the possibility of the film becoming that whitest of whales: a crossover Chinese-language international hit”.

Industry magazine The Hollywood Reporter hailed it as “a salute to the classic Hollywood film noir, an exciting stylistic tour-de-force” but questioned its foreign box-office prospects.

The film is virtually unknown in China as it has yet to be released. A Chinese state media report said the movie had already received a government permit for screening with release possible in April or May.

But some Chinese cinemagoers question whether political sensitivity might block the release of “Black Coal, Thin Ice” at home, or at least result in deep cuts to the original. China censors films it deems obscene or politically touchy.

“The sensitivity of the theme and content of the film is high, so I don't know whether it can be shown in China,” said a microblog posting under the name Jiade Changle.

The 11-day festival wraps up Sunday with screenings of its most popular features from a lineup of more than 400 movies.

On Thursday British director Ken Loach picked up an honorary Golden Bear for his life's work.