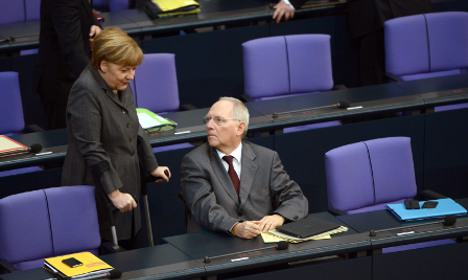 Finance Minister Wolfgang Schäuble had wanted to give the ailing Greek government a "demonstration of solidarity" by committing this spring to further support from Europe, Der Spiegel magazine reported.

"He sees the danger that without the prospect of further aid, radical parties in Greece could make big gains in the election," leading the government in Athens to collapse, the magazine said.
But it said Merkel's own domestic political concerns led her to veto the move over fears that the eurosceptic Alternative for Germany (AfD) could benefit from a fresh debate about aid for Greece ahead of EU elections on May 25th.
The AfD, which wants to abandon the euro and return to the deutschmark, was formed last year and failed to win any seats in September's general election.
But it scored seven percent in a recent poll, far above the three-percent hurdle for seats in the European Parliament.
The Eurogroup of eurozone finance ministers, where Schäuble represents Europe's biggest economy, decided in November that Greece could apply for help in reducing its massive debt if it achieves a primary budget surplus.
Prime Minister Antonis Samaras said on Sunday that Greece had registered a surplus of more than than €1.5 billion euros, exceeding requirements for additional debt aid.
However, EU Economics Affairs Commissioner Olli Rehn said in an interview published Sunday that he opposed further help for Athens ahead of the European elections.
He told Germany's Welt am Sonntag that a debate about further debt relief for Greece could be discussed "over the summer or afterwards".
At the height of the eurozone debt crisis, bankrupt Greece and other countries were forced to implement painful spending cuts in return for billions of euros in bailout aid from the EU and International Monetary Fund.
Merkel and Schäuble, as the chief champions of efforts to impose austerity, attracted the rage of citizens bearing the brunt of the measures.
In addition to the European poll, Samaras faces risky local elections in May in which his conservative party's main rivals, the anti-austerity leftist party Syriza, are poised to score major gains.
READ MORE: Ukraine opposition to ask Merkel for EU money