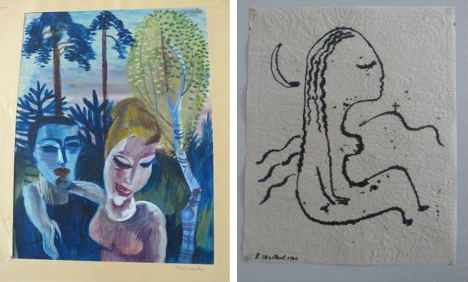 Two of the pictures found in the Gurlitt haul. Photo: DPA

The draft bill brought by the southern state of Bavaria, where the art hoard was found in a Munich apartment, would remove a 30-year statute of limitations that so far could protect people in possession of contested artwork.

The Hitler regime, which confiscated what it deemed degenerate modern art, also stole countless works from Jewish collectors or bought them under duress and for a pittance, then sold many for hard currency.

Germany has been criticised since news broke three months ago that around 1,400 long-lost works by the likes of Picasso, Cezanne and Degas had been discovered in the Munich flat of an elderly German recluse, the son of a Nazi-era art dealer.

Another 60-odd artworks, including pieces by Monet and Renoir, have now surfaced at the Salzburg, Austria house of the 81-year-old loner, Cornelius Gurlitt.

"The Gurlitt case revealed a flaw in German law that damages the reputation of Germany," said Bavarian Justice Minister Winfried Bausback, adding that "we must do something" to remove the legal hurdle.

The head of the World Jewish Congress Ronald Lauder last month urged Germany to introduce a law to specifically facilitate the return of Nazi-looted art, calling the works "the last prisoners of World War II".

Germany's proposed new law, dubbed the "Lex Gurlitt", was presented Friday in the upper house of parliament, which represents the 16 federal states, and would also have to pass the lower house.

It would not be retroactive, because this would breach Germany's basic law, and would therefore not affect the Gurlitt case.

Bausback said it would be "a reasonable solution which helps the victims and also complies with the constitution".

He said the wider problem would arise again "with each new find — be it the new discovery in Salzburg in the Gurlitt case, or future finds involving other people".

"And then we should be able to say: we didn't just talk about it at length, we found a solution".