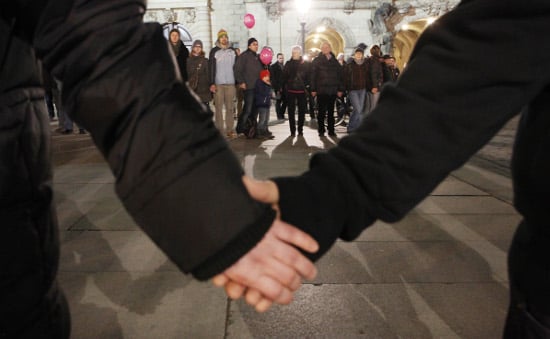 11,000 people formed a human chain across the city. Photo: DPA

Around 15,000 people attended the event marking the 69th anniversary of the bombing of Dresden on February 13th and 14th 1945, with 11,000 forming a human chain to prevent neo-Nazi demonstrators from turning up.

A rally organized by the far-right, which has hijacked the event in the past for ideological reasons, was unexpectedly cancelled on the eve of the memorial.

However, neo-Nazis were able to march through Dresden's old town with torches on Wednesday, with citizens protesting against the move, police said.

CLICK HERE for photos of the Dresden human chain Saxony State Premier Stanislaw Tillich, who joined the human chain, said the state was "no place for right-wing extremists".

The attempt by the right-wing to exploit the memory of the 25,000 people who died in the bombings was "shabby and intolerable", he added.

Lord Mayor of Dresden Helma Orosz warned against forgetting "that it was Nazi Germany, which forced other people and states into a fight between life and death".

She called for citizens to fight against neo-Nazism adding that as long as the "brown seed" continued to grow, "democracy and the dignity of all people are in danger".

US pastor Jeff Ingram, 54, who helped form the human chain, told The Local: “It was really moving to see 11,000 people just making a big statement. There were a lot of police about, but the atmosphere was quite relaxed.”