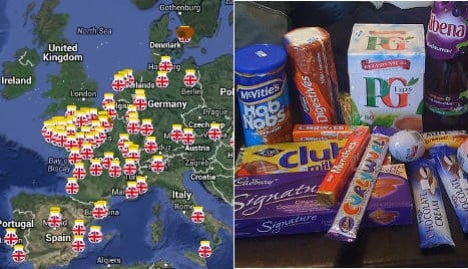 Expat financial advisor Which Offshore has come up with an innovative way of satisfying the gastronomical yearning some Brits get when they’re living abroad.

“We noticed there are loads of expats asking on forums where they can get British food products,” Which Offshore online editor Michael Brinksman told The Local.

“So a few of us got together and started compiling a list of British food stores around the world to make the expat search easier.

“The Marmite jar is for stores that sell British food products, the pig is for butchers and the pie is for bakeries,” Brincksman explained.

Thanks to the Google Maps interface users can zoom directly into the exact location of the store and also access contact details and a website if available.

But in comparison to its European neighbours, Germany is poorly served for British shops. The map lists just five stores in the country including in Munich, Berlin, Hamburg, Hannover and Meckenheim near Bonn.

“Spain and France seem to have the greatest number of British food shops, but we want users in other parts of the world like Scandinavia and Eastern Europe to let us know of any other stores as the aim is to continue updating it.”

The Which Offshore team also came across interesting findings during the research, like the abundance of British bakeries in South East Asia, where a fascination for English scones is reaching new levels.

READ MORE: Germany's expat tribes: Which one are you?