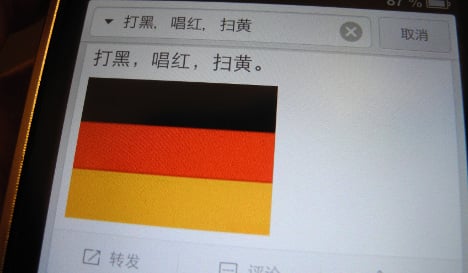 For the Chinese, the black, red and gold image, which has been shared thousands of times on Chinese social network Weibo, is not the German flag, but something quite different.

It started being shared online this week, following raids by police on Sunday against brothels in the city of Dongguan in the province of Guangdong. By Thursday 18,000 homes had been searched and 1,000 people arrested across the province.

Those against the raids took up the black, red and gold as their symbol. Black signifies corruption, red the blood – or suffering they were enduring – and yellow the symbol of prostitution.

It has also taken on social connotations, according to the South China Morning Post.

Black is at the top of the flag signifying the corrupt elite, red in the middle for the middle class who are being “bled” and yellow at the bottom to show the lower classes are so desperate in China they turn to prostitution.

But the authorities have also claimed the symbol as their own. For them black signifies striking out corruption, red singing communist songs, and yellow is the cleaning up of prostitution which is technically illegal in China.

Website Shanghaiist reported some posts of the flag had been shared 10,000 times on Weibo.

The raids, which started on Sunday night in Dongguan, were sparked by CCTV footage which showed hotels in China's “sex capital”, were involved in prostitution.

For Germans, the black, red and gold flag emerged in the early 19th Century in the romantic Nationalism movement following the Napoleonic Wars.

The black signified the dark present, the gold, the golden future of a unified Germany and the red in between was the bloody struggle to get there.