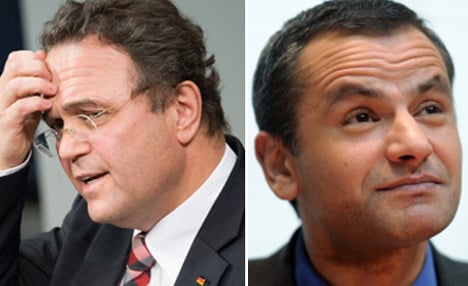 Agriculture Minister Friedrich (CSU) said earlier on Friday that he would only step down if the state prosecutor opened an investigation into him over his former role as interior minister.

But on Friday afternoon news agency DPA quoted government sources who stated that Friedrich would step down anyway. He has been under pressure from the opposition, who claim he breached official secrecy by providing the SPD with information about the Edathy case.

Chancellor Angela Merkel held an "intensive discussion" with Friedrich on Friday, her spokesman Steffen Seibert said, adding that the minister "is aware of the dimension of the case".

Bild newspaper reported that Merkel had put pressure on her agricultural minister to quit.

But speaking on Friday evening, the chancellor said she had accepted Friedrich's resignation with "great respect and regret".

She praised him for his work on the NSU murders adding that she wished him well for the future.

Friedrich said in a press conference on Friday evening he was convinced that he had handled the situation in a "politically and legally correct manner" by informing Gabriel.

But he added that the pressure over the last few hours had grown so much that he could no longer carry out his tasks as agriculture minister with the necessary "concentration, peace and political support".

The 56-year-old's resignation makes him the first minister of Merkel's new cabinet to go. He served as agriculture minister for two months, after previously serving as interior minister in the last government, where he received criticism over his handling of the NSA spying scandal.

On Friday Jörg Fröhlich, head of Hannover state prosecutor’s office, alleged that the material in the Edathy case included "pictures of naked boys aged nine to 13, possibly even 14 years old".

Edathy denied the accusations earlier this week. "The public allegation that I was in the possession of child pornographic magazines, or had bought them, is untrue," said the Social Democrat (SPD) politician in a statement on his Facebook page.

The politician came to national prominence last year when he chaired the parliamentary investigative committee into the failures of the authorities when investigating the series of murders later attributed to the NSU neo-Nazi terror group.

It emerged on Thursday that the SPD’s leading lights, Frank-Walter Steinmeier, who is Germany’s Foreign Minister and Thomas Oppermann, SPD parliamentary leader also knew in October about the allegations.

Oppermann said in a written statement on Thursday: “The SPD chairman Sigmar Gabriel was approached in October 2013 by Interior Minister Peter Friedrich [and heard] that Sebastian Edathy’s name had turned up in investigations abroad.”

Friedrich said on Friday that his choice to pass on the information to Gabriel was a decision “made with best possible knowledge and conscience”.