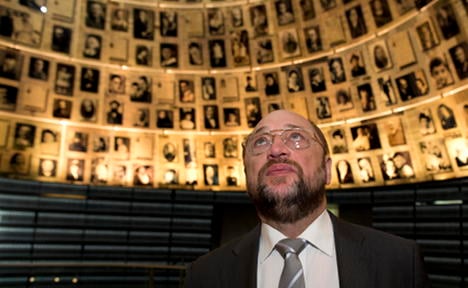 Leading German Social Democrat Schulz was giving a speech, in German, in Tel Aviv about Israeli-Palestinian peace process and the siege on Gaza, when the topic turned to Israeli settlements in the West Bank.

He said that Palestinians living in the landlocked area had access to less water than Israelis.

"I won't sit in the Knesset and hear a European, certainly not a German, saying such things," Naftali Bennett, Economy Minister told the Jerusalem Post.

Members of his right-wing The Jewish Home (Bayit Yehudi) party were so angry that they all got up and left the Knesset – Israel's parliament – while Schulz was still speaking. Several shouted “Palestinians are liars” as they left.

"When he said Palestinians get 17 litres of water for every 70 Israelis get, it was a total lie. It's preposterous," said Bennett, calling for the EU parliament president to apologise for the “two lies that had been whispered to him by Palestinians.”

Shortly before the speech Schulz told journalists that “criticism of either side is normal in democracy,” the Welt newspaper reported.

Prime Minister Benjamin Netanyahu refrained from applauding at the end of the speech. Talks between him and EU parliamentary president Schulz had, Spiegel Online news site reported, ended frostily earlier in the day.

Other politicians took to Facebook to express their thoughts on Schulz's speech. Mosche Feigling, member of Netanyahu's Likud party, purposefully did not attend. “It is not fitting that a speech, in the Jewish state, is given in the language in which our parents were ordered into iron wagons and into crematoriums.”