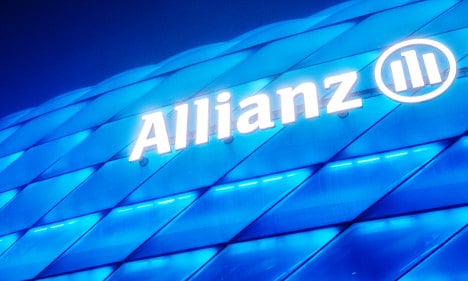 The new investment allows Bayern to pay their debt for the 2005 construction of the Allianz Arena stadium, the club's home ground. Photo: DPA

The deal, the biggest in Bundesliga history, will make Allianz the champions-league-topping Bavarian team's third shareholder.

Clothes manufacturer Adidas invested back in 2001 and car makers Audi got on board in 2009.

"The decision was unanimous among the board and advisory council. With the three Bavarian companies Allianz, Adidas and Audi, FC Bayer is a 'triple-A'," Hoeneß said.

"It is a dream – we're very proud of this, and of course it shows the strength of the team."

Bayern chairman Karl-Heinz Rummenigge had last week hinted the team could take on a new investor at the Spobis sport sponsoring conference in Düsseldorf.

But he made it clear even before the deal was announced that the team would not be blowing any new funds on a transfer shopping spree.

"If we do something like that [taking on a new shareholder], it will be invested in infrastructure, in bricks and mortar, not new players," said the president.

Instead the money will go to pay off Bayern's outstanding debt on the €340 million Allianz Arena stadium built back in 2005, as well as to fund a new training centre for talented young players.

The deal splits 25 percent of the club's equity equally between their three shareholders.

Previously Adidas and Audi each got 9.1 percent of Bayern's profits, but the €110 million capital injection allowed the team to renegotiate so the three investors each hold 8.33 percent.

The club itself remains the main shareholder, retaining 75 percent.

"With this, Bayern Munich has once more set the course for a solid, financially secure future for the club," said Chief Financial Officer Jan-Christian Dreesen.

The news comes after Bayern celebrated their 45th consecutive victory in a Bundesliga match, winning 2-0 against Nuremberg on Saturday.