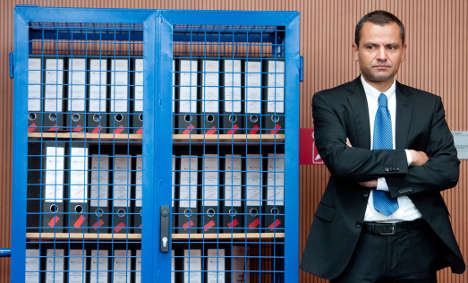 Edathy during his chairmanship of the NSU investigative committee. Photo: DPA

"The public allegation that I was in the possession of child pornographic magazines, or had bought them, is untrue," said Sebastian Edathy in a statement on his Facebook page.

"I take it the assumption of innocence also applies to me. There is no criminal behaviour to answer," added the 44-year-old domestic policy expert.

He also said he was intending to file charges as journalists from the paper were at the raids.

He came to national prominence last year when he chaired the parliamentary investigative committee into the failures of the authorities when investigating the series of murders later attributed to the NSU neo-Nazi terror group. His report recommended security services employ more people from ethnic minorities and he said: "We have concluded that we are dealing with massive institutional failures that resulted from a dramatic underestimation of the danger of the violent far-right in Germany."

Edathy's flat in Rehburg am Steinhuder Meer near Hannover, and offices in nearby Nienburg and Stadthagen were searched by police on Monday.

The Harke local newspaper wrote in a story the searches were for child pornographic material, citing unnamed Social Democrat sources for the information. It even published a photograph taken through the window of his flat, showing the interior.

The Hannover state prosecutor confirmed on Tuesday there was an investigation into Edathy, but would not say more than that. "I cannot say anything about the background to the investigation. In the light of the continuing investigation, I cannot offer further statements," said prosecutor spokeswoman Kathrin Söfker.